Broadcast Networks Opt Out Of The Presidential Speech Business 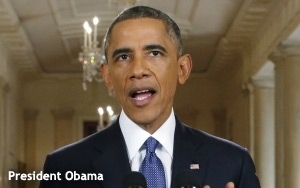 When the broadcast networks chose not to air President Obama’s immigration speech, they were just acknowledging what everybody else already knows: Speeches like this are available to watch in a thousand other places, so why should a broadcast network feel obligated to preempt its entertainment shows for such a thing?

The Big Four felt no such obligation to disrupt their Thursday night schedules, even though the President’s relatively brief address would delay the start of prime time for just 15 minutes. The speech was scheduled to start at 8 p.m. Eastern and end at 8:15, and the President politely kept to that time frame, give or take a minute or two.

The disruption might have lasted even longer -- perhaps all the way ’til 8:30, heaven forbid -- if the broadcast networks had followed the speech with a wrap-up segment in which various experts would have been seen explaining the ramifications of the speech to us dummies at home. That would likely have been the case if the networks had bothered to air the speech.

In case you haven't noticed, the broadcast networks have been ceding this kind of event to the cable news channels for a decade, or maybe longer. And now, with a speech like this one streaming all over the Internet, it seems more pointless than ever for a broadcast network to preempt its programming for a presidential speech except in the event of a dire emergency.

Most of these things -- last night’s executive order on immigration reform being a case in point -- do not represent national emergencies. But they get covered that way on the cable news channels. While the broadcast networks greet the White House’s request for airtime with yawns, for the news channels, a presidential speech like this one coming right at the onset of their prime-time talk shows is like winning the lottery.

Suddenly, there’s this story containing not just one but several very divisive issues that gets tossed in their laps just when they need it most. As a result, a 15-minute speech subsequently turns into three hours of blather that you can sum up in a phrase or two: MSNBC is for it, Fox is against it, and CNN works both sides of it (or something like that).

Long ago, I formed the habit of tuning into C-Span for presidential speeches because, except for entertaining some viewer phone calls directly following the event, C-Span doesn’t treat every government event it covers as either Armageddon or entertainment. And I don’t find news-channel blather to be particularly entertaining anymore. Most of the commentators the news channels book for these discussions are no more informed on these issues than you or I. They rarely have anything to say that’s reliable, constructive, informative or illuminating, so what's the point?

One of the byproducts of the networks’ decision to pass on the President’s speech Thursday night was the decision by some network affiliates to carry the speech anyway. Local news directors and station managers in some cities decided to air the speech because of the immigrant communities they serve, according to this story on Deadline.com.

It was refreshing to hear of these local stations making a decision that put their local communities first, and the needs of their networks second. Now more than ever, local broadcast stations need to maintain their positions as indispensable members of their communities. Local news happens to be where TV stations build their reputations and earn the lion’s share of their money. Once in a while, it’s OK for them to seize an opportunity such as this one to reinforce their positions in their markets as providers of news and information that is vitally important to the people who live there.