Up top is the first line of Shirley Ellis’ lyrics for the popular, late-1964 classic, "The Name Game." A stanza or two into the song, she proceeds to explain her process -- the rules -- of naming:

I betcha I can make a rhyme out of anybody’s name.

The first letter of the name, I treat it like it wasn’t there.

And then I say bo add a B then I say the name and Bonana fanna and a fo.

And then I say the name again with an F very plain and a fee fy and a mo.

And then I say the name again with an M this time and there isn’t any name that I can’t rhyme.

Taking a cue from Shirley and her approach to the name game, let’s discuss the naming game as it relates to “programmatic TV.” Or is it “TV programmatic”? The terminology seems to be used interchangeably in the marketplace, which in my opinion only serves as an impediment to the adoption of the “programmatic” methodology in the television realm.

Per Shirley’s instructions, one takes the first letter of the name and treats it like it isn’t there. So let’s begin. What should the first name be for our vivisection: TV or programmatic? When agency media planners investigate the different attributes of potential media verticals, they first have to christen or name those verticals to establish a focal point for discussion among all contributing media constituencies within the advertising agency i.e., planners, buyers, researchers, account people, strategists – tand he media biggies thus far: print, radio, TV, digital (search inclusive), out of home/placed based… For the purpose of this discourse, let’s stick with TV.

Once television’s sight, sound and motion attributes are selected as an integral component of a media plan, one of the first question raised is not cost but distribution: In which realm of the country does the marketer need commercial exposure? Is the TV campaign to be local, national, regional, multimarket and/or a combination thereof? Most recently, TV addressability has permeated the conversation. Pricing is next: broadcast, cable, syndication, unwired, and advanced TV (ad supported video on demand, full episode players, addressable). TV buyers are tasked with conjuring up costs, availability and marketplace overviews. Once the info is ascertained, the agency account constituencies pow-wow and a plan is born, to be scrutinized by the client, and hopefully blessed with little constructive alteration.

Rarely if ever in these conversations are distribution-buying methodologies entertained. As an example, when TV commercials were first distributed, the media community didn’t care whether the commercials arrived at the TV stations or TV networks through what was referred to as bicycling, or later by AT&T phone lines and still later by satellite. TV commercial purchasing processes were not lumped as “Bicycled TV,” AT&T’d TV,” or “Satellite’d TV.” Or, in the not-too-distant future, as “IP TV’d.” What if the designation for the distribution and negotiation of content across devices, which the media community currently refers to as “TV Everywhere” was instead labeled “Everywhere TV”? Would it help clarification?

The agency only cared that the commercial was delivered and inserted into the programming that was purchased by the agency – most probably by the TV buyer or investment officer or activation specialist or whatever title handles purchasing of television inventory today. So for the time being, let’s opt for the first word of the programmatic gambit to be TV.

Today, there is a TV vertical that generates $65+ billion of advertising revenue annually.  The digital video publishers and video ad networks, and programmatic progenitors seek consideration when the agency account mandarins huddle to discuss future television plans and budgets.  Historically, it has been easier – though still encumbered with challenges – for new video distribution networks to gain momentum with agencies if there was a pre-existing vertical rather than the forging of a splintered bucket. Upon entering the vertical, the horizontal cost evaluation was generally a strong determining factor coupled with the new proposition’s ability to reach a distinctive audience: 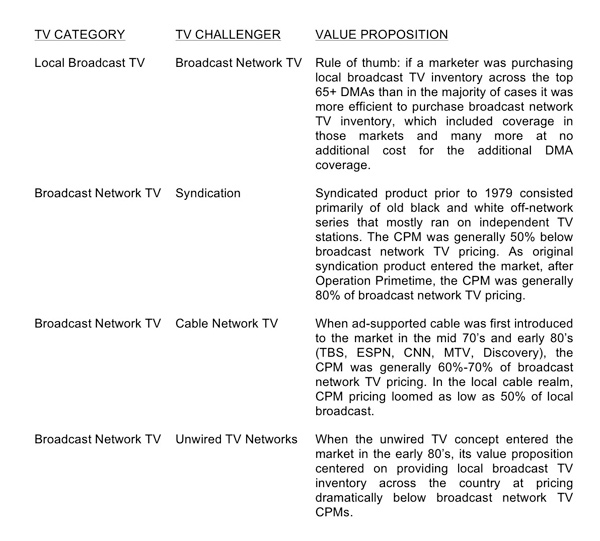 Over time, each challenger gained a foothold -- small budgets at first -- in the media plan and execution, and was able to prove value, deliver on its promise and augment its market share and CPMs. In many instances, original syndication fare, such as “Oprah” or “Wheel of Fortune,” was able to compete on a CPM basis with broadcast networks and cable networks; cable networks, such as ESPN and AMC, generated CPMs higher than many of the TV networks – both broadcast and rival cablers; unwired TV networks, such as ITN, organized their inventory around ad hoc genres (comedy, drama) and specific programs to garner meaningful CPM increases in the marketplace; and advanced TV’s addressability is demanding and receiving CPMs commensurate with its value proposition of one to one advertising.

“TV programmatic” will slide nicely into the TV vertical, to be evaluated on its merits -- which are many --- and receive its proper due over time through example. The conversation about melding of data, technology, viewing and device agnosticism, begins with the naming rights. A nomenclature that comfortably fits into established media parlance -- avoiding the territorial disputes between TV and digital video folk -- will only accelerate the dialogue.