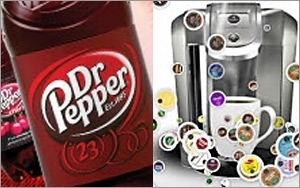 The multiyear deal, announced Wednesday morning, means that carbonated DPS brands will be available as single-serve, pod-based beverages using fountain syrup exclusively through the Keurig Cold machine in the U.S. and Canada — precluding DPS from offering its brands on the existing, competitive SodaStream machine or other at-home platforms. Financial terms of the deal were not disclosed.

Meanwhile, PepsiCo has been testing its own brands on SodaStream. It is unclear whether that limited agreement will be expanded for a rollout. PepsiCo CEO Indra Nooyi recently said that there are challenges related to replicating the taste of the company's soda brands, and the time involved in the at-home process. (Nooyi mentioned that consumers tend to view the "45 seconds" involved as "wasted time," noted The Wall Street Journal.)

Keurig Cold, in development for five years, is scheduled to launch in Fall 2015. According to Keurig, the machine can make enhanced waters, juice drinks, sports drinks and teas, as well as sodas, chilling room-temperature water to 38 degrees Fahrenheit in under a minute.

While Coca-Cola CEO Muhtar Kent described the Keurig Cold technology as "game changing," WSJ points out that Keurig's machines could be priced as high as around $200, and that the competitive SodaStream machines, which start at much lower prices, are still only in about 1% of U.S. homes, and saw their U.S. sales drop in the third quarter.

Keurig CEO Brian Kelley told WSJ that the company is also partnering with other beverage companies on the cold machine and will also launch some of its own pods, but declined to comment on the possibility of a deal with PepsiCo.