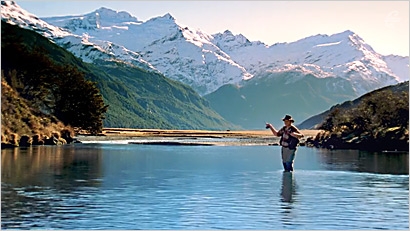 “Calling All Travelers” highlights the unique experiences that await travelers not only in New Zealand, but also throughout the journey on Air New Zealand.

The video opens with sweeping views of the country’s picturesque fjords. Viewers are then treated to glimpses of signature New Zealand experiences including a trip to the real-life Hobbiton, parachuting from rolling hillsides, golfing among rugged mountains and biking through vast plains.

Also shown is the comfortable flying experience that customers experience on their way to their destination.

Not unlike other videos produced by the brand, which has become known for quirkiness (such as in its Hobbit-themed safety video), the new video includes a touch of humor. What appears to be the video's voiceover is actually an airline attendant waxing poetic about his native country. But another attendant cuts him off and brings him back to reality. One of the passengers begins to give him the "slow clap" in response, but sheepishly goes back to reading after being shot down with the glance of another passenger.

The contest invites travelers to build their own personalized itineraries for a chance to win a vacation in New Zealand.

The prize includes two round-trip economy-class tickets from Los Angeles or San Francisco to Auckland (for the U.S. winner) or from Vancouver to Auckland (for the Canadian winner), plus one domestic flight for two while in New Zealand, four nights' accommodation (courtesy of Tourism New Zealand) and two activities from the winners’ itineraries (chosen by Air New Zealand). Entries close March 31.

The video seeks to show that New Zealand is a “magical place” with a bounty of activities that appeal to “true travelers,” says Air New Zealand Vice President of the Americas Chris Myers.

“Our ‘Calling All Travelers’ campaign and corresponding video captures the essence of the travel these individuals seek and illustrates what is possible in New Zealand,” Myers says in a release.