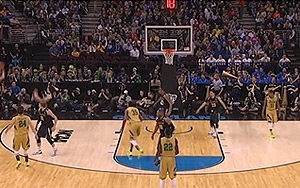 For the layperson like me when it comes to basketball, Sweet Sixteen refers to the last sixteen teams remaining in the National Collegiate Athletic Association tournament when speaking about the NCAA. (I had to look-up that one.) Google, which lists the scores and schedules in search engine query results, released data on search trends tied to the tournament. The data lists the top-searched Sweet 16 Teams, Mascots, Players, Coaches, Team Swag, and Marching Bands. Here goes.

The trends were pulled on March 24, and analyzes one week of data leading up the date. The Sweet 16 games will finish Friday, and the Elite 8 games begin running on March 28, and 29, according to one person educating me on the process.

Google used entity IDs, rather than search terms, to determine the searches. Entity IDs are identification codes that Google uses to categorize topics. For example, when a user searches for the term "lincoln" on google.com, Google needs to know whether that user is looking for the car, the President, or the film. There is a unique entity ID for each meaning of Lincoln, according to a Google spokesperson.

Mike Krzyzewski, Duke Blue Devils, ranks the No. 1 most searched on Sweet 16 coaches leading up to March Madness. John Calipari of the Kentucky Wildcats ranked No. 2, followed by Steve Alford of the UCLA Bruins at No. 3, and Bob Huggins of the West Virginia Mountaineers at No. 4, and Rick Pitino of the Louisville Cardinals at No. 5.

An update as of March 27, shows Kentucky Wildcats as the most searched on team, followed by Duke Blue Devils, Wisconsin Badgers, Michigan State Spartans, and Arizona Wildcats. The most searched on marching bands include, in order of ranking, University of Wisconsin-Madison, Michigan State, University of Oklahoma, University of Arizona, and UCLA. Finally, Bucky Badger for the Wisconsin Badgers took the No. 1 spot for the mascots. Sparty for Michigan State Spartans came in No. 2, followed by Wilbur and Wilma, Arizona Wildcats; Joe Bruin, UCLA Bruins; and Leprechaun, Notre Dame Fighting Irish.