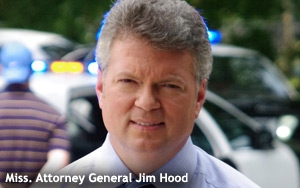 Google is seeking court orders requiring the Motion Picture Association of America, 21st Century Fox, NBC Universal and Viacom to turn over emails, drafts of legal papers and other correspondence between its representatives and Mississippi Attorney General Jim Hood.

The search company contends that the material could prove that Hollywood officials masterminded Hood's investigation of Google -- which was placed on hold in March by U.S. District Court Judge Henry Wingate in Mississippi.

“The documents are likely to show that the Attorney General's investigation was intended not to uncover supposed violations of Mississippi law, but instead to coerce Google into silencing speech that Viacom, Fox, and NBC do not like (such as search results, user-generated content and advertising), in violation of Google's constitutional rights,” the company says in court papers filed on Monday in New York.

Google adds that the studios “actually directed” Hood's handling of the investigation.

“Although Google's lawsuit is against Attorney General Hood, the architects of his campaign against Google appear to be interested parties that have spent years pursuing an anti-Google agenda,” the company says in its newest court papers. “Over a nearly two-year period prior to Google's lawsuit, it was they who determined the Attorney General's demands, they who wrote the letter in which the demands were conveyed, they who declared when 'the time for letter writing' had ended, and they who drafted the [subpoena] that AG Hood sent.”

The move is the latest development in Google's ongoing fight with Hood. Last December, the company sought a court order prohibiting Hood from enforcing a subpoena demanding information related to outside companies -- including operators of sites that Google indexes in its search engine -- that allegedly play a role in copyright infringement.

Google alleged that Hood spent months threatening to bring suit, or even a criminal prosecution, unless it blocks “objectionable” content created by consumers or outside companies. When Google didn't comply with Hood's requests, he served the company with a 79-page subpoena demanding millions of documents.

Wingate sided with Google in March, when he issued a preliminary order blocking Hood from continuing with the investigation. Hood is now appealing that order to the 5th Circuit.

Wingate also said that Google could obtain information from Hood that would be relevant to the company's request for a final order in the case.

The company went to court shortly after emails that surfaced in the Sony hack revealed “Project Goliath” -- a secret Hollywood-backed initiative to convince state attorneys general to target Google for allegedly enabling piracy.

Google says in its court papers that Viacom, Fox, and NBC are refusing to turn over any documents unless they will be kept confidential. The search company opposes that request

“Google's case is directed to a matter of significant public concern: the prolonged coercion of Google by a public official in derogation of the free speech rights of both Google and its users,” the company says. “It is difficult to see why documents relating to those activities should be kept from the public.”