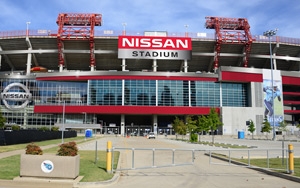 Nissan North America is now the official automotive partner of its hometown Tennessee Titans NFL team. The partnership with the Nashville-based team includes a 20-year, exclusive naming-rights deal with the city-owned downtown stadium, host to all Titans home games. The venue, now Nissan Stadium, has been the Titans’ home since 1999; it is also home to Tennessee State University football games, the Music City Bowl, and the annual CMA Music Festival and a U.S. Soccer match slated for July 3 of this year.

Fred Diaz, SVP, sales and marketing at Nissan North America, Inc., tells Marketing Daily that the deal gives Nissan branding opportunities on the exterior of the stadium, and perhaps more importantly — because of game broadcasts — signage in the stadium and near the field. It is part of Nissan’s “Fewer, bigger, better” strategy to put Nissan on big stages versus a lot of lesser media platforms. It is evinced by Nissan's multi-year deal as exclusive sponsor of the Heisman Trust, which includes “Heisman House” advertising.

The deal works for Nissan on many levels, per Diaz -- not least of which is the fact that the official Titan team color is red, which is also Nissan's brand hue. And Nissan is coming out with the much-needed redesign of its full-size Titan pickup at the end of the year. But Diaz says that while the truck timing is serendipitous, the fact that the vehicle has the same name as the team is not a central tenet of the relationship, nor was it a core driver for Nissan having pursued the deal. “It's about the brand, but the Titan timing did make it even better.”

He concedes that the company briefly considered naming the stadium Nissan Titan Stadium, but didn't want to make it about just one vehicle. And he notes that research shows that when you give a stadium three names it gets shortened to two words. That might have worked out to Titan stadium, in which case Nissan would have lost some benefit.

Diaz says Nissan’s long-standing sponsorship of the Heisman Trust will be a lot bigger too this year. And with that comes another benefit: Marcus Mariota — who, as quarterback for the Oregon Ducks, won the 2014 Heisman— is preparing to start with the Titans (assuming they get the contract done). “We have a relationship with him; that and the stadium sponsorship just makes it seem like the stars are aligned.”

Nissan is also a sponsor of the NCAA playoffs, a deliberate move to consolidate its presence, versus bowl-by-bowl activity. On the global stage, Nissan last April signed on as sponsor of the largest club football league in Europe, the UEFA Champions League. And, of course, there was Nissan's return to the Super Bowl this year.

Diaz says that the “fewer, better, better” approach is about buffing up awareness and opinion. “When we do research on brand and awareness, we do have opportunities to optimize what people think and feel about our brand, and to put ourselves on a national stage with naming rights just makes sense.” He says Nissan is doing well during the consumers consideration and cross-shopping phase, but needs more work at the top. Late last year, the company launched the third-generation Murano crossover, it is just launching the 2016 model year Maxima, and then, later this year, the Titan. “We have a lot to talk about,” says Diaz.

Nissan is also automotive sponsor of NBC's “The Voice” for the second of a three-year deal.

As part of the Titans sponsorship, Nissan will be involved with several charitable organizations and community outreach in middle Tennessee, including the annual Taste of Titans event, for which Nissan will serve as presenting sponsor, and this year benefits the Wounded Warrior Project.

“We want the people of the U.S., of Tennessee, and Nashville to understand that we love being here and living here,” Diaz says. “And a lot of people don't realize that 85% of what we sell here is built here.”