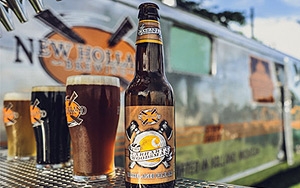 New Holland Brewing Co. and Carhartt work wear are partnering on a beer and an entertainment tour.

The beer, The Carhartt Woodsman, was originally created last year to celebrate the clothing company’s 125th anniversary. It is returning for a second year, while the tour is a new twist on the collaboration.

The tour crew -- including storytellers, musicians, and artists from New Holland, Carhartt and beyond -- is reaching out to hear and share stories “with the people who make our country's landscape unique,” according to the companies in a release. Proceeds from the tour will be used to support Glen Arbor Township, Mich.’s Disaster Relief Fund.

The tour kicks off Sept. 16 at the New Holland Pub in Holland, Mich. and stops in several cities in Michigan and Missouri before arriving in Lakewood, Colo. for a finale event featuring "The Voice" star and Michigan native Joshua Davis. The tour then parks at craft beer’s biggest stage, the Great American Beer Festival in Denver.

“Our collaboration with Carhartt has been rich with story, and we’re looking forward to hitting the road to bring The Carhartt Woodsman back to the thirsty public and create some more,” says New Holland Vice President of Brand and Lifestyle Fred Bueltmann in a release.

The two brands are promoting the partnership on the tour site and on social media with the hashtag #CarharttWoodsman.