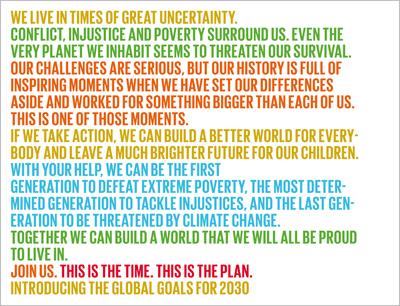 It was an offer that creative agency Trollbäck + Co couldn't refuse. Last September, filmmaker and humanitarian Sir Richard Curtis reached out to the shop with a simple request: Help me make the United Nations' Global Goals for Sustainable Development famous.

"Richard kind of dared me," says agency founder Jakob Trollbäck. "He said that he had this little side project that he was playing with. It involved getting the whole 7 [billion] population to care about 17 Goals that were written in dense political language. He asked me if I was up for helping him doing something as insane as that. He promised that we would have a good time even if we failed. I didn’t stop to think but said I’m in.”

The project needed to take a document written in the dense language of geopolitics, and turn it into something accessible, shareable, optimistic, and above all, comprehensible to the world’s 7 billion people.

The resulting creative work is simple with clear designs that paraphrase the dry UN text that make the 17 Goals easy to understand and to reference. "It’s a huge logical, political and diplomatic puzzle that has to be solved and structured in writing before any design could be possible," says Trollbäck. "In the end we always use less words because the design has already inherited the sentiment of the strategic conclusions."

This month representatives from the 193 member states of the United Nations will sign The Global Goals for Sustainable Development, a document outlining a shared vision for humanity and the planet through 2030.

One challenge for the agency: Figure out a way to communicate with everyone from Kenyan taxi drivers to Chinese factory workers to tech-obsessed American millennials to media and cultural tastemakers.

For instance, “No Hunger” couldn’t be represented with a fork or knife or chopsticks or any other object that would speak to some nationalities and cultures but not to others. They instead drafted a simple bowl with steam rising. Throughout, they used bold typography and bright colors to express the determination and optimism at the core of this effort.

Trollbäck’s branding work will be used in all the future communications efforts by the UN, the UNF, and Project Everyone about The Global Goals, including at Project Everyone's kickoff event at the Global Citizen Festival in New York’s Central Park on September 26th.

The agency labored on this project largely out of goodwill and good intentions. "We were paid some money initially by project everyone," says Trollbäck. "We gave them an at cost rate so that we would not be out of pocket with the project since we needed to hire some external resources to pull it off. That money is long gone and we have been running 100% pro bono the last three months."

The agency is also working on additional positioning of the brand as well as a PSA with Mekanism and PVBLIC Foundation.

These designs will also become part of the Creative Commons so every organization and person working on behalf of The Goals can put them to use.