All Hail Megyn Kelly, TV's Top Newswoman - And From Fox, No Less 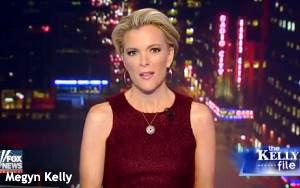 Megyn Kelly is suddenly the premier TV newswoman in America.

Well, maybe “suddenly” is not quite accurate since her success did not exactly happen overnight. Her nightly news-and-talk show on Fox News Channel, “The Kelly File,” has been the centerpiece of FNC’s prime-time lineup for more than two years, since October 2013.

In recent months, though, the graph line on her public profile has shot up dramatically, following her confrontation with Donald Trump when she moderated (with Chris Wallace and Bret Baier) the first Fox News Channel Republican debate last August in Cleveland.

Cut to the present day and Kelly, 45, is on the cover of Vanity Fair (the February issue) and turning up on the late-night shows – Feb. 5 on “The Tonight Show” and two days later (Feb. 7) on a special edition of “The Late Show with Stephen Colbert” that aired on CBS after the Super Bowl.

In the Vanity Fair profile and elsewhere, she’s being praised for asking tough questions when she interviews newsmakers on “The Kelly File.” The questions she asked Trump to open the debate last August were a case in point: She pointedly called him on his past statements denigrating women, he threw a hissy fit and her reputation was made.

Megyn the inquisitor has also earned a reputation for conducting tough interviews regardless of her guests’ political leanings, which has helped her give an impression that she’s nonpartisan – a rarity in the ranks of Fox News Channel’s top personalities. However, not to take away from her impressive preparedness and skeptical line of inquiry, but it also should be noted that the vast majority of her guests are not exactly liberal.

What the “nonpartisan” label really means is that she doesn’t lob softballs at the Republicans, conservatives and other FOFs (Friends of Fox) who appear on her show. It is logical to contemplate (but not yet proven) that she would be just as tough, if not tougher, on Bernie Sanders or Hillary Clinton too, but they haven’t appeared yet on “The Kelly File.”

Kelly’s emergence as the most talked-about newswoman on television represents another milestone in the migration of TV news from broadcast to cable. It is a generational shift not unlike the one that happened recently in late-night TV, in which an “old guard” of late-night hosts with roots in the TV business of the late 20th century – Jay Leno, David Letterman and, yes, Jon Stewart – were replaced by younger personalities in the last two years.

In TV news, the top stars were once minted exclusively by the broadcast network news divisions. It wasn’t that long ago that a small group of female news stars, each with comparable clout, were known for their high stakes competition over high-profile interview subjects known as “gets” – Diane Sawyer, Barbara Walters, Katie Couric and a few others such as Connie Chung (going back a few years).

Their last hurrah might have been Sawyer’s interview on ABC last year with Bruce Jenner a few months before he became Caitlyn. Nowadays, you don’t hear much about this group. Walters retired, Couric works for Yahoo and Sawyer turns up intermittently.

The relative, continued strength of network news shows such as the evening newscasts and “60 Minutes” notwithstanding, the heat in TV news now emanates principally from the cable news channels. They have a built-in advantage, of course, since they do news all day long. As a result, broadcast TV has long been in the process of increasingly abdicating long-form news coverage to the cable channels.

For example, not too long ago, the networks might have preempted prime-time programming for an hour – perhaps 10-11 p.m. Eastern – to cover a news event on the level of Tuesday’s New Hampshire primary.

Once in a great while, the networks will still break into regularly scheduled programs for a special report on a breaking news story (such as last year’s mass shooting in San Bernardino). But they didn’t bother with this week’s New Hampshire election results.

It was another sign that the network news divisions are seen by their parent companies more as producers of TV shows such as “60 Minutes,” “Dateline” and “What Would You Do?” that can be repackaged and repurposed for sale to cable networks (and thus generate revenue) than as destinations for viewers seeking coverage of breaking news – in this case, election results.

And now, a cable TV news personality – from Fox News Channel, no less – is the nation’s top TV newswoman. Just a few years ago, who would have thought this was possible?

politics, tv
6 comments about "All Hail Megyn Kelly, TV's Top Newswoman - And From Fox, No Less".
Check to receive email when comments are posted.
Read more comments >
Next story loading