H&M Shows Off Its Coachella Lineup 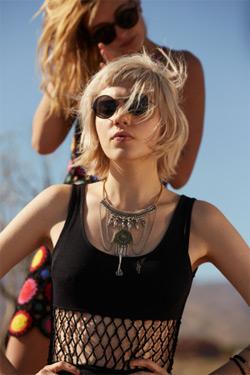 H&M is unveiling the new clothing connection it’s cooked up for the Coachella Valley Music and Arts Festival, called #HMLovesCoachella. The Swedish fast-fashion powerhouse, which partnered with the music festival last year as well, says the new line goes on sale March 31, offering “freewheeling playfulness…. mixing, not matching, and conveying a message of ease and freedom.”

"We love Coachella because we enjoy its democratic spirit and the bonding experience it creates,” the chain says in its release announcing the new collection. “To us, Coachella is about using fashion and music to express energy and that is what is reflected in this collection.”

The sponsorship is the latest example of the company’s effort to built cultural clout with Gen Y, at a time of intense price-driven competition in the apparel market. And it’s working. In addition to its impressive sales, Morningstar points out that H&M is the top-rated apparel brand, as ranked by Interbrand, giving it an advantage over such direct competitors as Zara, Top Shop, and Forever 21.

In its most recent quarter, sales are up 14%. And while sales are also strong at Inditex, the Spanish company that owns Zara, others in the cheap-chic crowd are struggling. Japan’s Fast Retailing, for example, has dramatically cut back on expansion plans in the U.S. for Uniqlo, its casual clothing chain, after missing profit targets. And last week, the Gap reported that comparable-store sales sank 8%, including a 6% drop at Gap, a 17% plunge at Banana Republic, and a 6% fall at Old Navy.

Morningstar says H&M’s size, fast-fashion prowess and strong brand identity give it a narrow advantage over competitors. And its plan to increase store count by 10%-15% each year for the next five years, as well as rolling out its e-commerce platforms, “is sound and will result in little cannibalization.”

But constant price promotions are a threat. “Many competitors are trying to implement the fast-fashion model in their businesses including Gap, making it more likely that other brands may be more competitive on price, which may hurt market share. Also, reliance on the success of new concepts and product lines increases as the H&M brand matures.”

Meanwhile, Coachella’s appeal keeps growing. Guns N’ Roses is scheduled to appear this year, the first time performing together since 1993. Besides H&M, other corporate sponsors include Absolut, American Express, Heineken and Sirius XM.