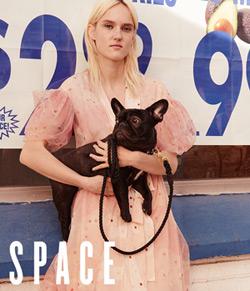 Nordstrom is America’s favorite store for fashion for the fourth year running, according to a new ranking from Market Force. And despite posting weak sales at its mainline stores, the Seattle-based retailer says its e-commerce and off-price efforts are gaining traction.

But the Market Force study also finds that Nordstrom, long considered a customer service legend, is slipping. Using a composite loyalty score based on 5,700 consumers, it says that while Nordstrom scored highest with 58%, that represents an 8% decline from its 2015 score. Discount chains are gaining in loyalty, with Marshalls coming in second, followed by H&M, Ross Dress for Less, Kohl’s and Macy’s.

The Market Force ranking digs into seven areas it says are key to loyalty, including merchandise selection, value, store atmosphere, the ability to create a full outfit, speed at checkout, and how easy it is to find items and sizes. And a full third of respondents say the store they most recently visited let them down in all seven areas. Nordstrom won on atmosphere, size selection and quick checkouts. And H&M did well across the spectrum, coming in highest on selection, the ability to create an outfit and ease of finding things in the store. Based on value, Marshalls and Old Navy came in highest.

Overall, it says there’s a notable lack of engagement. For example, while 84% of shoppers bought something, less than half say a salesperson helped. And of those who left empty-handed, two-thirds say no sales associate even tried to make a connection.

Some 67% say they use some form of social media as part of their shopping, and in terms of mobile apps, Target is winning in awareness, with 66% acknowledging they’d heard of the app. And while H&M’s app had low awareness, at just 26%, it was the most used.

Meanwhile, Nordstrom says its fourth-quarter sales climbed 5.2% to $4,1 billion. But there was a shift from brick-and-mortar to digital: Sales in its full-line stores actually fell 2.5% in the quarter, and comparable-store sales dropped 3.2%. But its e-commerce sales climbed 11%. And sales at its lower-price divisions, Nordstrom Rack and Haute Look, climbed 12% with same-store sales climbing 3.6%.

As a result, Standard & Poor's Ratings Services lowered its credit rating, saying that while the chain’s outlook is stable, the downgrade reflects “softer-than-expected second half results,” writes analyst Helena Song, hurt by unseasonably warm weather denting sales of winter apparel and “a protracted promotional environment that continued into the fourth quarter, which contributed to continued weak holiday sales.”