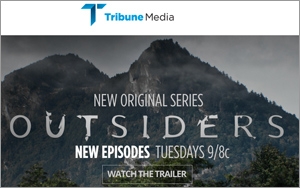 Amid its announced efforts to consider a full or partial sale of its company, Tribune Media posted mixed financial results for its fourth-quarter reporting period.

Core advertising for its TV stations rose 2.6% or $8.1 million, but was down 9% for the period to $346.5 million. Ad revenues were impacted by a decline of $46.5 million in political advertising dollars.

Virtually all TV station groups have seen declines in political advertising during the same time period.

Digital revenues from its businesses -- including Gracenote, What’s On and Baseline as well as new digital purchases Sports, SportsDirect, and Enswers -- were up 18% in the fourth quarter to $71 million and 25% for full-year 2015 to $211.5 million.

Tribune posted a net loss of $380.9 million versus a net income $314.6 million, and a 1% drop in total revenue to $547.6 million. Tribune blamed higher programming expenses and the lower political advertising dollars for the decline.

Tribune said it hired advisers to “explore the full range of strategic and financial alternatives to enhance shareholder value.”