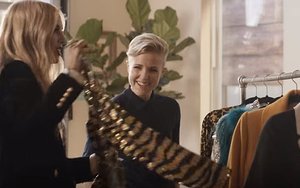 As part of its “Passion for Pasta” campaign, Barilla has released a video series dubbed “While the Water Boils.”

The premise: YouTube darling Hannah Hart of “My Drunk Kitchen” fame interviews celebrities known for being passionate about their work and art -- each lasting about five minutes, or the time it takes to cook pasta.

Nye, for instance, talks passionately about the importance of exploring outer space, pointing out that the space program was the origin of the Internet and the satellites behind all of today’s weather reports.

Zoe (at left above, with Hart) talks about having been in love with fashion since childhood — even before she knew it was called “fashion.”

Brantley (below) talks about early influences including coloring books and superhero cartoons, graffiti as an art form, and what he keeps in his sketchbook.

The videos (plus teaser videos) are all viewable on Barilla’s YouTube channel and the campaign site, PassionForPasta.com.

At the end of each video, Hart and her guest eat pasta, as screen messages convey Barilla’s campaign theme: “Life is nothing without passion. Ours is pasta. PassionforPasta.com.”

Each video also provides a link to another video that shows how to make a recipe that was created by Barilla in honor of the celebrity interviewee.