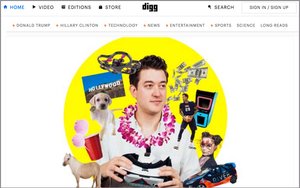 Gannett, the parent of USA Today, has invested in digital media company Digg.

In a statement, Gannett said the investment is an opportunity to expand its content distribution capabilities and improve user experience, including across messaging platforms. Earlier this year, Digg released its first integrations with Facebook Messenger and Slack.

“As we continue to build out our digital footprint, this will play an important role,” Bernard told The Wall Street Journal.

Digg was founded in 2004. The company started out as a news aggregator made up of links posted by Digg users who could promote or demote stories. In 2008, the company was valued at $164 million, WSJ reports.

In 2010, with the rise of Facebook, Twitter and Reddit — and a badly-received redesign — Digg’s audience had fallen by more than half. The company was sold to tech development firm Betaworks for $500,00.

Betaworks brought in a new team to lead Digg and in 2015 it raised $4 million in a funding round.

Gannett is also currently embroiled in high-stakes talks with Tronc, formerly known as Tribune Media). According to Bloomberg, Tronc is considering Gannett’s takeover bid of about $673 million, suggesting it may drop its fierce resistance to a merger of the two publishers. The companies are discussing an offer by Gannett for around $18.50 a share.
m&a, newspapers, search, web sites
Next story loading