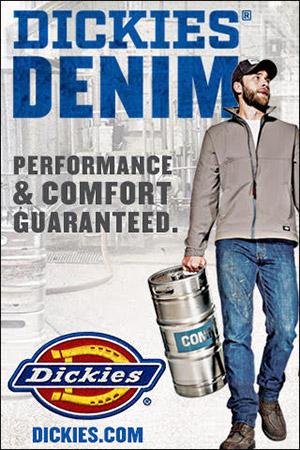 Dickies is targeting its core consumer target--blue-collar workers--with a new campaign that showcases Dickies Performance Denim, the new collection of work denim made for the job site.

A TV ad features a voiceover detailing how Dickies has clothed men since 1922 and underscores its trust and authenticity over images of men working as a craft brewer, mechanic, construction worker, steelworker and farmer.

To create the spot, King & Country leveraged 3D and compositing artists as well as motion-controlled double exposure photography, combined with programmable and repeatable camera movement to seamlessly transition from one environment to the next while keeping the characters at the center of the action.

The print ads use a hybrid of bold type and gritty realism that highlight the benefits of Dickies Denim "when put to the test in a variety of work environments."

The new campaign follows Dickies’ recently-signed partnership with Discovery Channel's “Fast N’ Loud” and its star, Richard Rawlings, who will serve as a Dickies brand ambassador. Dickies is the official apparel of the show’s featured auto shop, Gas Monkey Garage.

The new TV ad will run through December 31 during NFL and NCAA football games, and during “Fast N’ Loud” on the Discovery Channel.

Print ads are being placed in automotive and outdoor publications. Other campaign components include programmatic display and digital video ads and out-of-home executions in select markets.