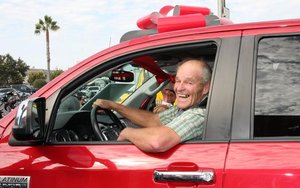 Baca was in need of transportation for himself and his service dog JoJo. American Soldier Network learned of Baca and reached out to Congressional Medal of Honor recipient Dakota Meyer, who then contacted Toyota, a company he partners with.

After Meyer introduced ASN to Toyota, they made plans to surprise Baca with a Platinum edition Toyota Tundra. They presented it recently during the Forgotten Sons “Ride to Live” fund-raising motorcycle ride to raise awareness and prevent soldier/veteran suicide event at the Elks Lodge in Oceanside, Calif.

Toyota Veterans Association President Michael Smith, who served as a Marine in both Operation Desert Shield and Operation Desert Storm, presented the truck -- complete with a service agreement, pre-paid maintenance plan and $3,500 in gas cards -- to Baca, enabling him to continue his work with veteran and advocacy groups like ASN.

“As a veteran myself, I can truly understand the many perils that John and his fellow troops endured defending our nation,” Smith said in a release. “It gives me great pleasure to present him with this Tundra on behalf of Toyota and our team members across America as just a small token of our gratitude to him for his service.”

After honoring Baca with the vehicle, Toyota also announced that it is donating $5,000 to ASN, to help defray the costs of assisting other veterans who are in need of help.