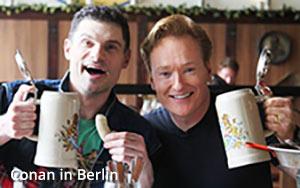 Sausages, beer, kinky sex and folk-dancing in lederhosen are the predictable subjects Conan O’Brien takes up in his latest travel special, “Conan Without Borders: Berlin.”

Only once during this one-hour show -- which gets a prime-time time slot Wednesday night on TBS -- does he veer into unexpected territory, when he interviews a group of refugees from the Middle East who are killing time at Berlin’s Tempelhof Airport.

The segment lasts only a few minutes, but it puts a human face on these refugees and provides a mildly illuminating look at their plight.

For Conan, this kook’s tour of Berlin is the latest in a series of occasional travel specials, which are beginning to look like he’s auditioning for a post-late-night career as a Travel Channel personality.

Previous trips have taken him to Cuba, Armenia, the two Koreas (mostly South, briefly in the North) and Qatar (with Michelle Obama). If there’s a theme running through these shows, it’s in the choice of destinations -- which have been decidedly farflung for the most part.

Berlin -- which is not exactly an exotic locale -- would not seem to fit into this group. On the show, Conan says the motivation for this visit came after he befriended a German comedian who appeared as a guest on his TBS show, “Conan.”

The name of this comedian, who is featured widely in the Berlin special too, is nowhere to be found in the press materials (such as they are) that were provided by the “Conan” show. Actually, except for video of the show itself and a couple of photos that lacked captions, there was no information.

Is this what the modern Germany is really like? Or did the show get its preconceived notions about the country from old magazines? Mad and Cracked come immediately to mind.

The show might have worked better if Conan had produced a talk show, or perhaps a week of them, in the German capital -- like he does when he travels to American cities such as New York from his customary home base in Los Angeles.

Those shows feature a combination of in-studio guests and man-on-the-street bits. This Berlin show’s reliance solely on the latter gets old fast. Inviting celebrities from the worlds of German media and entertainment -- as Conan does on any given night with U.S. celebrities on his late-night show -- would have had the potential to be a lot more eye-opening and a lot more interesting.

The fact is, the bar for this kind of thing has been raised lately by several travel shows and their hosts -- most notably Anthony Bourdain on CNN. Surely, there must have been some other way for Conan to derive a few laughs from German culture other than visiting a sausage maker.