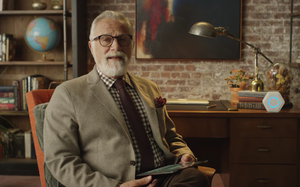 Luma, maker of a wifi device that it claims is better than all the rest, has enlisted some “interesting” help to promote itself in a crowded electronics marketplace, during a busy holiday season.

Jonathan Goldsmith, perhaps best known as Dos Equis’ former “Most Interesting Man In The World,” has become the wifi company’s spokesman and investor, appearing in a new digital campaign for the brand (though without the decidedly rakish look and accent).

“While we are big fans of the work Jonathan has done throughout his career, which plans more than 50 years and includes over 300 starring roles in film and television, we are working with Jonathan Goldsmith, the man behind the actor,” Luma CEO and co-founder Paul Judge, tells Marketing Daily. “We believe his natural sense of humor, curiosity, honesty, humility and gravitas serve us well at Luma and his communication style captures the company’s spirit.”

In the spot, Goldsmith acknowledges his advertising fame, noting he’s from “those commercials you like a lot.” He likens wifi to basic needs such as food, water and shelter. “When the Internet goes down, that’s when s—t gets dark,” he says. Luma’s product, he suggests, can keep one’s family protected from an array of issues, ranging from Russian hackers to “cartoon porn,” while eliminating dead spots and shooting a signal around the house like a “fire hose.” By the end of the spot, he encourages people to send their wifi stories to him via Twitter (@LumaHome), telling them to “Take Your Wifi back.”

“People should expect more from their wifi,” Judge says. “The industry has been boring, staid and giving people the bare minimum for a long time. It’s time to change that with fast Internet that removes dead spots and gives you control and security.”