The New York Times will kick off the 2017 NewFronts with a presentation the morning of May 1, 2017 and Mashable will wrap it up the afternoon of May 12th, according to a calendar released this morning by the Interactive Advertising Bureau (see below).

A total of 24 “digital content” publishers are scheduled to pitch Madison Avenue over the course of the two-week series of events in New York City.

It is the sixth annual NewFronts, which was originally conceived and organized by Publicis’ Digitas, but which has since been handed over to the IAB, whose Digital Video Center of Excellence will once again host a “research luncheon” during the second week of the events, highlighting new studies and insights from a range of presenters. 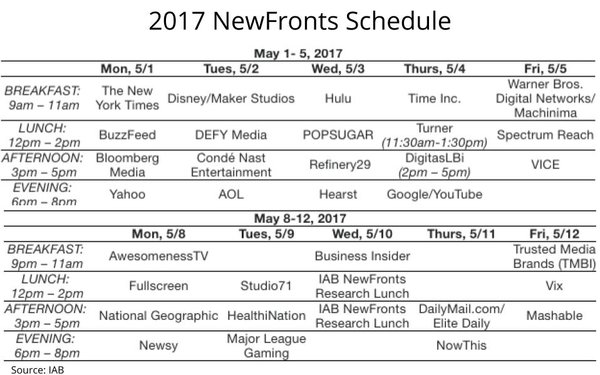