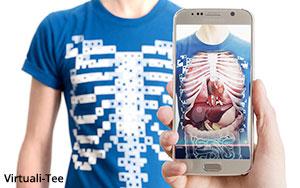 The following post was previously published in MediaPost's Connected Thinking:

It’s taken a number of years, but augmented reality is finally getting some traction.

One of the initial uses was in real estate, when Amsterdam-based Layar created an AR app so prospective apartment seekers could point their camera at a building and instantly see units for sale or rent, with associated data about each apartment displayed on their smartphone screen.

That application never took hold in a big way and Layar eventually was acquired after it had created multiple useful AR applications (I used it on the covers of my last two books).

After a few years of that, as well as augmented reality being added to magazine ads and editorial content, there was kind of a lull until Pokémon Go came along.

The popular game introduced millions of people around the globe to the world of augmented reality.

Even the White House recently got involved, adding its own AR app, "1600," as I wrote about here.

Consumers are about to get another marketing does of AR in toys this holiday season.

Jay Wright, president and general manager of Vuforia, the PTC company behind more than 30,000 AR apps, provided me with a list of some of the toys powered by augmented reality.

These range from a magnifying glass for AR viewing by children to virtual reality goggles to get a glimpse of the world of insects. There are plenty of AR toys here and coming.

For example, the NeobearMagnifier NEO is a hand-held magnifying glass designed to create AR viewing for children. Hologrid: Monster Battle lets players see monsters created by the animator of "Star Wars" in battle.

While the marketing of these and many other AR toys will be aimed at both parents and children, it’s the children who receive the toys and become immersed in AR experiences who will drive a substantial piece of the future AR market.