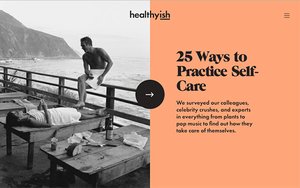 Healthyish editor Amanda Shapiro told the The Daily Front Row that in comparison to Bon Appétit, the new extension is more of a lifestyle brand.

“The voice is less about authority and more about exploration.” she told the publication.

Shapiro wrote in a memo announcing the launch of Healthyish that the name comes from a term that was used by staffers at Bon Appétit to describe how most try to eat.

“As in, we like knowing where our food comes from, what’s in it, and who made it. We care about how food makes us feel. But, also, we're not losing sleep over it. We’re not nutritionists. We don't count calories or fret about our cholesterol levels (the good or bad kind)... So we created Healthyish as a community for people who feel the same,” she wrote.

The site launches with 30 videos, a collection of recipes, profiles and essays written by celebrities like Samantha Bee and Steph and Ayesha Curry. For example, a series on self-care includes a soundbites from TV stars like Issa Rae from “Insecure” and Randall Park from “Fresh Off the Boat.”

The magazine has also partnered with Sweetgreen on a special “Bon Appétit Healthyish Bowl,” available at the salad shop until February 1. Interested consumers can order the salad online and pick it up at Sweetgreen locations.

This is just one of many brand extensions Bon Appétit plans to launch in the third quarter of 2017, Adweek reports.