Tom Brady Ad Parade: Love From Under Armour And, Finally, A Dig At Goodell 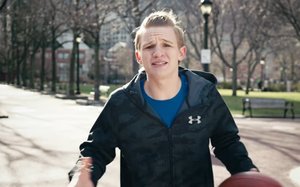 Amid the continuing jubilation over the Patriots' last-minute win against the Atlanta Falcons, quarterback Tom Brady just cemented his role as patron saint of New England sports advertising.

The Patriots’ win, which adds a fifth Super Bowl victory to his long list of accomplishments, as well as his fourth time as MVP of the big game, is seen by many as a vindication for Brady’s four-game suspension early this season. Brady has not spoken out publicly criticizing Goodell, despite nonstop prodding by sports reporters, and resounding boos that have followed Goodell all season.

But the new ad for Shields MRI—made well before the epic game itself—shows Brady putting his jewelry—five Super Bowl rings—in a locker. “We’re going to have to get you a bigger locker,” the attendant says. “Roger that,” Brady grins. (An earlier version of the spot, released a few weeks ago, shows him stashing just four rings in the locker. “Is that all?” she asks, he answers “For now.”)

Under Armour’s ad, released as soon as the game ended, is called “The Legend of Tom Brady,” created by agency Droga 5. Delivered by fans with hardcore Boston accents (and no trace of No. 12 himself), it’s a fun look at a city that pretty much thinks he walks on water. Brady, who left Nike for Under Armour way back in 2010, appears in multiple campaigns for Under Armour, including his just-introduced TB12 sleepwear.

But it’s a tumultuous time for Under Armour. Last week, the Baltimore-based company handed investors a rare financial disappointment, with revenues coming in below analyst’s expectations. For the quarter, revenues climbed 12% to $1.3 billion, while North American sales gained just 6%. And profits slipped to $104.9 million, down from $105.6 million in the same period a year ago. Income also came in below expectations.

“Numerous challenges and disruptions in North American retail tempered our fourth quarter results," says Kevin Plank, its CEO, in its release. He also says the company’s revenue growth this year is likely to be in the 11 to 12% range. Before these results, the Wall Street Journal reports that Under Armour delivered 26 consecutive quarters with revenue gains exceeding 20%.

Plank says the company is still well positioned. "The current environment represents an inflection point to maximize our unique strengths by staying on offense— investing smartly in innovation, deepening our brand connection with consumers and amplifying our focus on operational excellence — positioning Under Armour as a stronger company," he says.

But industry observers aren’t so sure, and Standard & Poor’s revised its forecast downward as a result of the weaker-than-expected numbers. And it switched the company to a negative rating, citing a “challenging industry outlook because of strong competition leading to pricing pressure and a weak retail environment in its core North American market,” as well as “weak operational execution by the company.”

1 comment about "Tom Brady Ad Parade: Love From Under Armour And, Finally, A Dig At Goodell".
Check to receive email when comments are posted.
Next story loading