Worst Sitcom Of The Year Jokes About James Gandolfini's Death 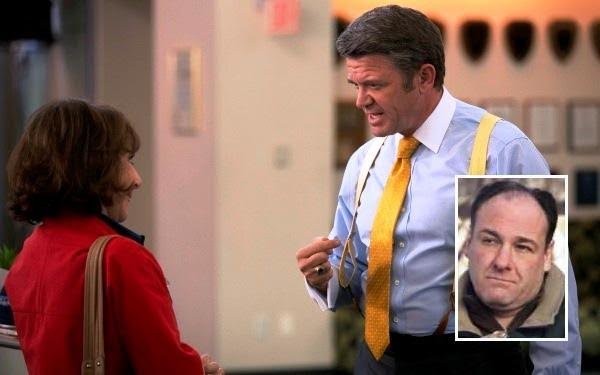 Television comedy achieves a new low when a new sitcom premiering next week on NBC plays the death of James Gandolfini for laughs.

The death of Gandolfini -- who was arguably the most revered and beloved actor in the history of television -- is just a big joke for the writers, producers and actors involved in this new show titled “Great News,” premiering next Tuesday night.

If you are one of the millions who loved James Gandolfini in “The Sopranos” and were shocked and saddened by his sudden death from a heart attack in June 2013 at age 51, then the arrival of this show is not great news at all. Instead, it is terrible news.

Prime-time network TV doesn’t get any more tasteless than this. In next week’s premiere episode of “Great News,” the subject of Gandolfini’s death is raised in a dialogue between Andrea Martin and John Michael Higgins in the scene pictured above (with Gandolfini, inset).

In the show, Andrea Martin plays a 60-something stay-at-home mom in Manhattan who somehow becomes an intern on the TV news show where her grown daughter (Briga Heelan) works as a segment producer.

Higgins plays Chuck Pierce, the co-anchor of this fictional news show called “The Breakdown.” Nicole Richie plays his co-anchor. The show’s executive producers include Tina Fey, Robert Carlock and Tracey Wigfield, who is credited as creator. All three worked on “30 Rock.”

In the “Great News” scene, Martin demonstrates that she is the only person in this newsroom who is capable of talking back to this egotistical anchorman.

When he complains childishly when she is late in providing him with his afternoon snack, she warns him that if he doesn’t watch what he eats, he might end up dying of a heart attack like James Gandolfini.

“I mean, you’re not like that, um, uh, oh, gosh -- who was that actor who died? You know, mob show, come on …,” says Martin, to begin this process of turning the death of James Gandolfini into NBC comedy fodder.

“James Gandolfini!” says her daughter in a loud whisper while standing behind her mother.

And then Martin’s character says to Chuck, the anchorman: “You’re not like him, Chuck, but you could be!”

Fortunately, this sitcom doesn’t have a laugh track because you can be sure the producers would have inserted the sound of gales of laughter at this juncture to reflect the side-splitting hilarity of James Gandolfini’s health issues and sudden death.

Coming across this scene while previewing this episode on Friday morning was one of the most jarring moments I have had in many seasons.

I fervently hope that friends and loved ones of James Gandolfini don’t decide to sample “Great News” and then come across this woeful piece of “comedic” dialogue.

As for the rest of the show, the whole thing is a big miss. One gets the impression that the creator and her co-producers wished to make a comedy about a fictional TV news show more or less along the same lines as “30 Rock,” which was about a fictional network sketch-comedy show. The two shows even look and sound alike.

Unfortunately, it’s clear that the people involved in this show -- who had a feel for the world of sketch-comedy shows -- are not familiar with the world they are depicting here in “Great News.”

Instead, “Great News” seems to be more influenced by previous TV comedies about TV newsrooms than about real TV newsrooms, starting with the anchorman, who is little more than a modern-day version of Ted Baxter -- still the reigning champion among TV’s fictional anchormen.

At the center of “Great News” is this mother-daughter tandem played by Martin and Heelan. And yet the two don’t even look remotely alike. They’re so different that you might wonder if the daughter was adopted.

You’re not supposed to wonder that, but nor should you be expected to laugh knowingly when Martin and Higgins talk lightheartedly about the death of James Gandolfini, who deserves to rest in peace.