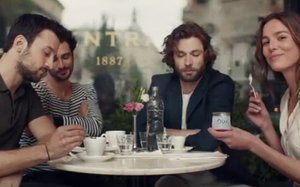 After years of struggling to recapture share, the team at General Mills’s Yoplait believe that they’ve come up with a truly disruptive new product — backed by a distinctive launch campaign.

The product, Oui by Yoplait, comes in a small glass jar. And in contrast to Yoplait Greek, which has proved no match for Chobani and other established Greek competitors, Oui is positioned as being a return to Yoplait’s French roots.

Oui was “inspired by a traditional French recipe,” says the brand, underlining the crucial-to-success authenticity angle by referencing Yoplait’s origins in a French dairy cooperative in 1964. The new product is described as “subtly sweet,” with a “thick, creamy texture” that’s very different from that of Greek yogurts.

In line with the expectations of today’s yogurt consumer, it’s made with “simple,” non-GMO (and gluten-free) ingredients, including “real” fruit on the bottom. But there’s another big differentiating hook: The ingredients aren’t just cultured in large batches and fed into cups; they’re poured into individual glass pots and left to set for eight hours, while the culturing process does its stuff.

And there’s more. The story behind that story, says Yoplait, is that Oui emerged from the childhood memories of French native Brice LeRoy, innovation product designer for the General Mills dairy group, who watched his parents make “pot set” yogurt.

“We’re really going back and embracing the way yogurt was made in the past to help create an entirely new category in the yogurt aisle,” Yoplait director Doug Martin declared about Oui, in General Mills’s blog.

The ads — including a 60-second anthem spot (below), a 30-second version of same, plus several 15-second vignettes — tell  the story of “Melanie.”

Melanie is a pretty, chic young French woman strongly reminiscent of unpredictable, supremely confident, maddening-yet-charming female characters in French films of the 60’s. The creative winks at the stereotypes, aiming to create a character who’s naughty but likeable.

Melanie roams Paris, toying with three different lovers (and yes, refreshingly, they are straightforwardly termed “lovers”) who are all named Jean, because she likes the sound of the name.

But she often makes them wait while she savors a jar of Oui, because it’s meant to be eaten slowly — and as the male narrator with a thick French accent points out — she always prioritizes savoring food and the other simple joys of life over “practical” (apparently bourgeois) concerns like being on time.