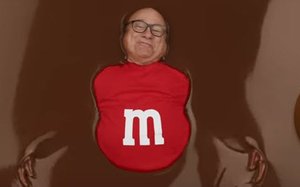 That’s the smile-inducing scenario of a just-released 15-second Super Bowl ad teaser video (below) from M&M’s.

The candy brand announced back in December that it would return to the Big Game this year. Its 30-second spot will air during the game’s first quarter, preceded by a single airing of the teaser video during the Super Bowl LII pre-game show on NBC.

“We felt that Danny DeVito brought the perfect amount of humor needed for this year’s Super Bowl spot, and we know our fans will be delighted to see how he interacts with some of our beloved spokescandies,” said M&M’s brand director Allison Miazga-Bedrick.

The premise was inspired by the brand’s longtime tradition of featuring a red M&M rising up through liquid chocolate at the end of its commercials.

The spot will also feature a guest appearance by YouTube star, actor and singer Todrick Hall.

Earlier this month, the brand previewed the new commercial to a handful of film critics and captured their reactions in a video aired  during the Critics’ Choice Awards Red Carpet Show aired on January 11.

M&M’s is also running a contest across its social media channels asking fans to submit their best touchdown dance featuring M&M’S for a chance to win custom prizes.