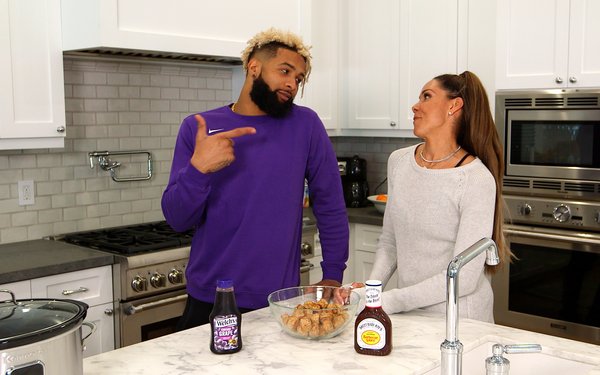 In a video (below), Van Norman shows her son how to make what he declares is one of his favorite Game-Day snacks: Welch’s Grape Jelly Meatballs. The two engage in humorous banter, and Odell translates some of his signature on-field moves — like a one-handed catch — to the kitchen.

The video is being promoted on the brand’s social channels, including Twitter.

Fans are being encouraged to share their own party recipes on Game Day, using @Welchs and #GrapeJellyMeatballs, for a chance to win giveaways such as signed Odell Beckham Jr. items to Welch’s swag. The giveaways will continue into the week after the game.

Meanwhile, Beckham is also helping to drive engagement by offering fans — through a video and social posts — a chance to win a pair of Nike Air Force 1’s signed by him. To participate, consumers are being asked to suggest their own special ingredient for the recipe, in the comments section below Beckham’s post on Twitter and Facebook.

Zeno Group was the lead creative for the Welch’s program.