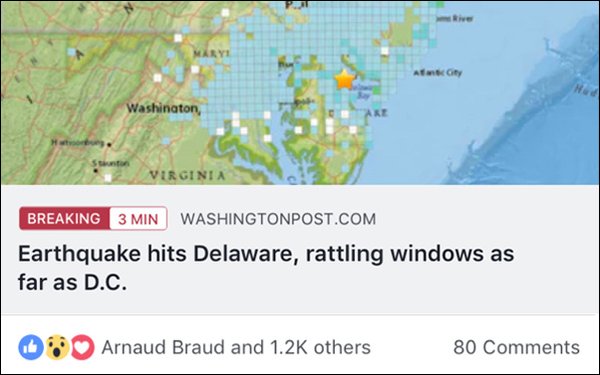 The tech titan plans to expand the test to include more than 50 additional publishers in North America, Latin America, Europe and Australia.

“Publishers in the test will be able to label Instant Articles, mobile and web links, and Facebook Live as breaking news,” Joey Rhyu, Product Manager at Facebook, notes in a new blog post.

For now, partner publishers can use the “breaking news” indicator only once a day, but they can leave the designation in effect for up to six hours at a time.

Since the test began last November, Facebook has found users are more apt to engage with news when it is labeled as “breaking.”

From early December to mid-January, news being labeled as such resulted in a 4% rise in click-through rates, a 7% lift in “likes,” a 4% increase in comments, and 11% swelling in shares.

Playing the breaking-news game has its risks, particularly for a company that has received so much negative attention for enabling “foreign meddling, ‘fake news’ and political polarization,” in the words of Samidh Chakrabarti, a product manager at Facebook.

How well Facebook can balance faster news cycles with efforts to better police its content remains to be seen.Illustrating this point, the company just killed its Explore Feed -- an ill-fated News Feed experiment that separated professional posts from those of users’ friends and family.

Launched in six countries last October, the effort was inspired by user requests for more posts from friends and family. Facebook quickly determined that users and publishers did not appreciate the change.