E-Gamers Are Just As Crazed As You Think 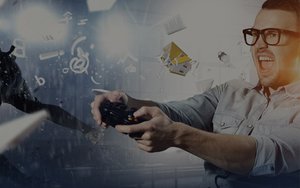 There’s a world of difference between hard-core gamers and the more casual sort. More than 20% of play for less than one hour a week. But 7% play more than 20 hours a week.

That’s one of the top line findings from a new study of gaming from Limelight Networks — that as many of its stats makes it clear, e-gamers are a pretty rabid bunch.

Gamers spend an average of 1 hour and 48 minutes just watching others play games online, more time each week than they spend watching the big pro sports telecast. Gamers ages 18-25 report watching other people play games for 3 hours and 42 minutes a week, compared to watching traditional sports on TV (2:55) or online (2:27).

“You see people like Jerry Jones and John Goff investing in gaming, and leagues starting up, and you realize, ‘People who know a helluva lot more than I do about sports know something big is happening here,’” said Mike Milligan, senior director, product and solution marketing for Limelight.

This survey was fielded by a third-party company with access to consumer panels in France, Germany, Japan, South Korea, the United Kingdom, and the United States. In each country, 500 responses were collected for a total of 3,000. The survey was taken in January.

For Limelight Networks, the most salient part of the study might be the one others would quickly look past. Limelight’s Orchestrate Platform enables customers, like e-game providers, to deliver digital content quickly and safely, worldwide.

And as this survey suggests, speed matters. Fast performance is a top priority for gamers. In four of the the six nations studied, gamers said performance was their most important consideration. (In France, an interesting story line mattered more. In Japan, simplicity counted the most.)

And 57% say they won’t play on an insecure system.

But three-quarters of the gamers expressed occasional frustration with download times.

On average men spend more time (7 hours and 19 minutes) playing, two hours more than women. More than 60% said they have sacrificed sleep so they could play — and 11% said they have missed work to play games instead.

And in fact, half of all male gamers said they would quit their job if they were confident they could support themselves as a pro gamer.