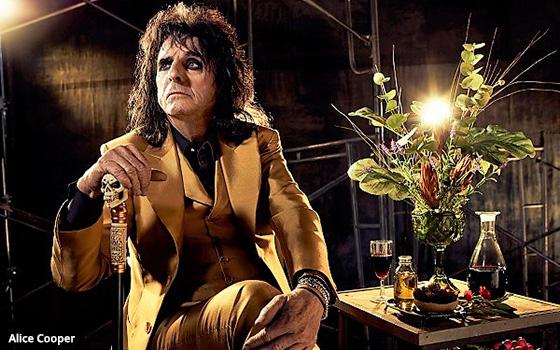 On a New Jersey Transit train from Morristown to New York City late on a Sunday evening recently, a couple seated across the aisle from us were evidently excited.

They were baby boomers around our age and they were eager to engage in a conversation with two strangers because they had just come from a concert they had enjoyed very much: Alice Cooper at Morristown’s Mayo Performing Arts Center.

I thought of this encounter when contemplating this TV Blog about this coming Sunday’s three-hour live production of “Jesus Christ Superstar” on NBC, in which Cooper is in the cast playing the role of King Herod.

It had me thinking: What an incredible medium TV can be sometimes. Imagine that -- Alice Cooper in a production of “Jesus Christ Superstar” on network television. Whoever engineered this casting coup deserves a laurel and hearty handshake.

For that matter, network television's commitment to these occasional live musicals is to be commended also. They are challenging productions, presumably requiring substantial investments in time and money. And they do not necessarily score blockbuster ratings either.

The ball got rolling with “The Sound of Music” on NBC in December 2013, which scored high ratings and raised expectations for similar results with subsequent productions. These have included 2014's “Peter Pan,” 2015's “The Wiz” and 2016’s “Hairspray” on NBC. Fox produced a live version of “Grease” in January 2016 and “A Christmas Story” last December.

With its “In Concert” title, this production of “Jesus Christ Superstar” is being staged as a concert, not a full-fledged musical, according to NBC. It will be performed live before an audience at an armory in Brooklyn.

Cooper plays a supporting role, while the lead roles of Jesus and Mary Magdalene are to be played by John Legend and Sara Bareilles. Andrew Lloyd Webber and Tim Rice, creators of the original show that debuted on Broadway in 1971, are listed as executive producers.

Airing for three hours on a holiday evening, this live musical is in no way assured of high ratings, or even decent ratings, truth be told.

That's why all congratulations and thanks are due to NBC for mounting this production anyway. It is an increasingly rare thing in television to put on a show at great cost when a return on that investment figures to be modest at best.

This production seems as if it is going ahead for the simple reason that NBC has the ability to do it. Or to put it another way, if our biggest TV networks don't do this every once in a while, who will?

The answer is: Nobody.