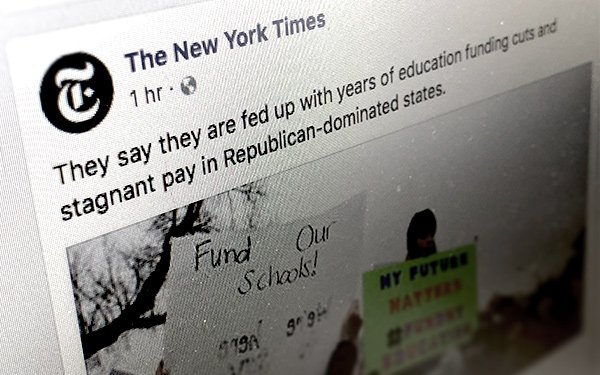 Hard news publishers were not heavily affected by Facebook’s algorithm change two months ago, according to a report from NewsWhip, a service that monitors social media for publishers and marketers.

In January, Facebook CEO Mark Zuckerberg announced the social media platform's News Feed would change -- and users could “expect to see more from [their] friends, family and groups [and] less public content like posts from businesses, brands, and media,” in a push to encourage “meaningful interactions” on the platform.

According to Zuckerberg, the visibility of news in the News Feed has only dropped from 5% to 4% since the change.

Breaking news and current events coverage drove engagements for the most viral stories on Facebook.

Since the Facebook algorithm change, 56 of the top 100 most engaging articles as of March 15 have been hard news or current event stories.

Fifty-three of the top 100 stories were from general news publishers.

Some publishers, like NBC and Fox News, had actually experienced an increase in engagement since the algorithm change.

NBC passed Fox News in February, becoming the most engaged publisher on the platform for the first time since January 2017.

NewsWhip's data “suggests that the major sites with network abilities and scale in breaking news events are likely to continue to perform well on social media," according to the report.

NewsWhip estimates publishers put about 20% of their web content on their Pages, and the other 80% comes down to their readers sharing and posting content on the platform.

Comments are also an important part of Facebook engagement for publishers. In January 2016, on average, 3.36% of a top Facebook post’s engagements came from comments. Now, comments account for about 11%, on average.

Fake news is still a problem on Facebook, as well. The fake news story with the most engagement on Facebook ranked 26th overall from January 2018 to March 2018. The story, titled “Disastrous’ Flu Shot Is Causing Deadly Flu Outbreak,” came from Your Newswire.