There has been a lot of talk about the General Data Protection Regulation, or GDPR, set to roll out next month in the European Union. Nonetheless, the majority of Americans have never heard of the upcoming tightening of consumer data privacy and only 11% feel that they know a lot about it, according to a recent survey.

Meanwhile, many Facebook users report being more concerned with their data privacy than a month ago given the preponderance of news reports critical of the social media platform. 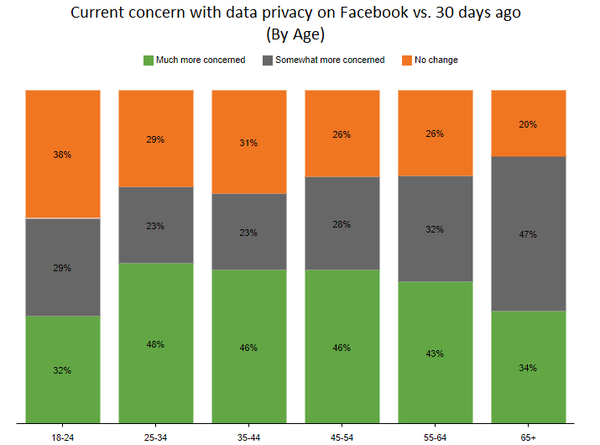 If you are like the 58% of respondents that had not heard of the GDPR before the survey, the GDPR is a set of rules that dramatically changes the way companies can use and store personal data of all EU individuals. Males are more likely to have some level of familiarity with the GDPR, with only 54% reporting they had never heard of the it vs. 63% of females.

Almost all of those interviewed are positive toward the GDPR (62%) while 36% remain neutral. Only 2% report negative feelings. Those who say they are very familiar with the GDPR are the most favorable, with 72% feeling very positive. Thirty-nine percent of those between the ages of 35-44 report very positive feelings, making them the most receptive age group.

While respondents were generally favorable toward the GDPR, most feel that government authorities will never be able to completely dictate and enforce what companies do with consumer data (63%).

According to survey findings, the way that companies store, share, and use consumer data is a cause for concern for most Americans. Eighty-six percent report that they are either somewhat or very concerned with the way their data is handled in general. Worries are highest among those ages 65+ with 57% saying they are very concerned, compared to only 36% of those 18-24 saying the same.

Among the 75% of survey takers that have an active Facebook account, 43% report that they are much more concerned with their data privacy on Facebook than they were 30 days ago. Twenty-nine percent are somewhat more concerned and the remaining 29% report no change from 30 days ago. While the majority of all age cohorts indicate more concern, 38% of 18-24-year olds report no change, making them the group least affected by recent controversies involving the giant social platform.