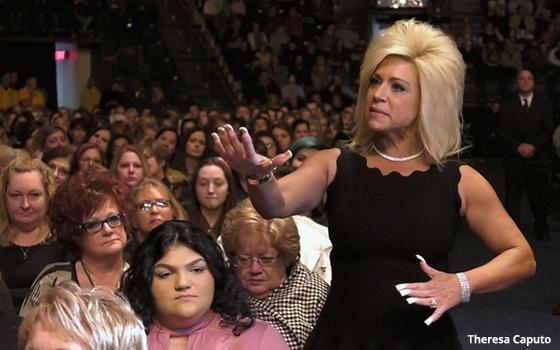 We sometimes forget just how famous these people are.

An episode of “Long Island Medium” seen Sunday night on TLC served as a reminder of just how life-changing it can be for someone to be plucked from relative obscurity to headline his or her own reality TV show.

“Long Island Medium,” which premiered in 2011, is now in its 10th or 11th season (online sources differ). The star is Theresa Caputo (seen in the photo above), a long-time resident of Hicksville, Long Island, who claims to possess special extrasensory abilities that enable her to communicate with the spirits of dead people.

On the show, she is seen applying her skills as a medium to connecting the living with the dead -- in living rooms, across kitchen tables and sometimes in theaters and auditoriums.

She enters a room, briefly explains to the sometimes skeptical people sitting there what she does and what they can expect. She then pauses for a moment and begins the process of communicating with spirits who just happen to come to her.

Whether or not she is legitimate I will leave to the determination of people who are experts in debunking people like her. I will say this: She is a very impressive show woman, and for the people whose dead relatives she contacts, their encounters with Theresa seem to be very meaningful.

But back to Sunday's show, which was a two-hour episode that included glimpses of her life as the star of a touring show. She was seen on a tour bus just like a country music star would use as she traveled to live-appearance dates from Texas to Ohio to upstate New York (and other places) -- towns such as Youngstown, Ohio, and Binghamton and Utica, New York.

At each place, she played the town’s biggest theater (including those old restored movie palaces that every small- and medium-sized city seems to have).

The shows were often sold out and the audiences were very attentive and excited to be seeing Theresa Caputo in person. In very high heels and her trademark hair, she roamed the aisles of these theaters seeking participants whose relatives were already contacting her and, according to her, seeking a connection with their living family members.

The live shows seen on the TV show were very impressive productions. It was obvious that a great deal of money goes into them. It can also be assumed that these tours are profitable for Theresa Caputo, who has been a celebrity now for only about seven years.

Judging from the reaction of showgoers and other people she meets on her show, she is very popular and in many cases, outright idolized.

This season, “Long Island Medium” is also delving into the apparent collapse of her marriage to her husband of 28 years, Larry Caputo. Whether or not their separation was somehow brought on by the changes wrought in their lives by her fame is not clear.

What's the point? It’s just this: While many of us encounter shows such as “Long Island Medium” all the time, regarding each of them as just another show we are not likely to watch, they are nonetheless followed by millions of other people.

For example, one such show is the one on TLC called “My Big Fat Fabulous Life,” starring a young, full-figured woman named Whitney Way Thore. While I tend to discount this show whenever I see it, I recently came to learn that the show is somewhat of a phenomenon -- at least among many women who identify with Whitney.

I learned this from Whitney herself, when I ran into her at the Discovery upfront earlier this month -- and she informed me that she had just recently signed with one of Hollywood's biggest agencies, UTA (United Talent), for books and personal appearances. My impression of her was that she is very charismatic, and I liked her very much.

For that matter, so is Theresa Caputo, whom I have met with her husband, Larry, more than once at year-end parties the Discovery networks throw every December for members of the press. They seem like very nice people. I hope they can find a way to patch things up.