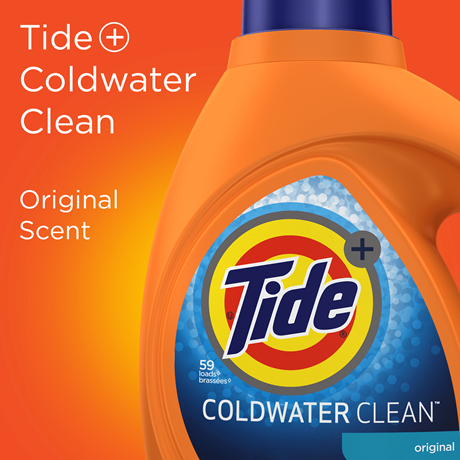 Researchers for Procter & Gamble’s Tide detergent say new, patented formulations improve the performance of the brand’s cold temperature product, which P&G has been selling since 2005.

If it is eventually marketed, it could increase the ability of its Tide Coldwater brand to do its job and help Tide reduce greenhouse gas emissions by reducing consumer need to heat water for laundry. That environmental aspect is part of a broad corporate mandate.

But, a P&G spokesperson tells Marketing Daily, “commercialization of P&G plans are not being discussed at this time” and says the scientific effort simply shows the company’s sustainability efforts. News of the new surfactants was detailed at two recent technical conferences.

“Current Tide formulas clean very well in cold water, with the help of specialized enzymes (a protease and an amylase)” she adds.

New “branched surfactants,” she says, would be especially helpful on food grease stains. The surfactants, which are substances that reduce surface tension, work on grease that clings to synthetic fabrics.

P&G earlier had created a goal to convert 70% of all washing machine loads to cold water by 2020, from 38% at the beginning of this decade. But with changes in how washers work, P&G has altered that somewhat, aiming for 70% of loads being washed in cold and quick-cycle mode. Recently, P&G determined 61% are being done that way, says Mary Begovic Johnson, Tide’s senior scientific communications manager responding to an inquiry.

P&G began marketing Tide Coldwater with a giant ad and marketing campaign. It even altered its historical orange packaging to add a big dose of blue on Coldwater containers. P&G said then that consumers wanted a cold-water alternative, but didn’t always trust cold water washing to be tough enough.

The idea that hot water cleans best is hard to break. But 80% of the energy consumed from washing comes from heating the water.

“Reducing greenhouse gas emissions is a top sustainability priority for P&G, and enabling lower-energy washing is an important part of that,” says Begovic Johnson, in a statement. “We’re committed to designing detergents that deliver a superior Tide clean in cold water conditions so consumers don’t have to choose between clean clothes and being environmentally conscious.”

Sustainability is a big buzzword and a goal in a growing number of industries even as official federal policy seems to be trending heavily in the other direction. For example, the Trump administration has proposed a 72% cut in sustainability research. Overall, consumers are supporters of environmental efforts, but Millennials are especially so.

Young or old, when cold water doesn’t do the job, consumers throw it back in the washer and turn up the heat, using up more energy, as much as 300 pounds of carbon dioxide a year, says P&G.

“Precise and sophisticated design of our surfactant molecules, down to the specific carbon chain lengths and positioning of branches on that chain, shows potential for impressive stain-fighting power in different types of washing machines and settings. And these branched surfactants are highly biodegradable, which is a definite bonus.”