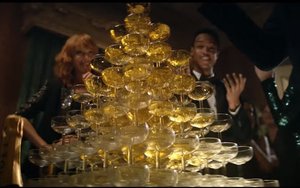 Called “Must Be,” the campaign is from Ogilvy.

Its centerpiece is a 60-second video directed by Manu Cossu, who has previously worked on campaigns for brands including Adidas, YSL, Apple, Audi, and Dior’s Miss Dior video featuring Natalie Portman, as well as music videos for A$AP Rocky, Drake and Skrillex.

The new video (below) depicts major, emotional moments in individuals’ lives — ranging from a man running through the streets to meet his newborn child, to a young ballerina stepping onto the stage for the first time, to an astronaut about to make history as she braces for landing on Mars — and shows various styles of Moët Champagne “magnifying” these moments.

The message: “Life’s most memorable moments must be Moët & Chandon.”

In contrast, the brand’s last global platform, “The Now,” declared that “every second is an experience,” and focused on encouraging young adults to enjoy the Champagne as part of casual social occasions, like pool parties.

The new video, from Ogilvy, was launched on June 9 to coincide with the brand’s annual day of hosted celebrations around the world, “Moët Grand Day,” and the first “Rosé Day LA.”

The film will be released across digital platforms, social media and movie theaters.