It's Skyn Condoms Versus The Digital World 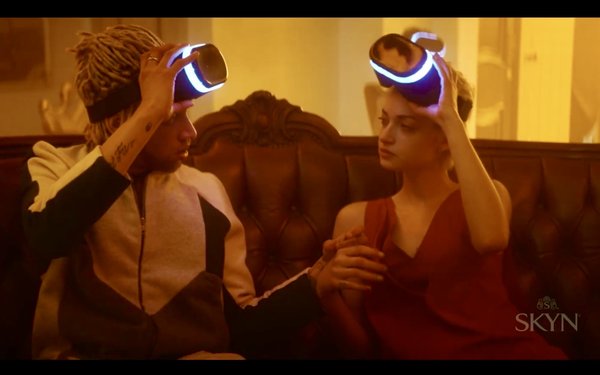 The makers of Skyn Condoms have launched a “Save Intimacy” campaign that implicitly suggests that virtual reality videos and smartphones are competing with good old sex. It might be true. Some research says that in the balance between high tech and high touch, high tech is winning.

Skyn’s new digital-only commercial, created with the Sid Lee Paris agency, says, “Technology is wonderful,” and then after a moment, the script continues “when it brings us together.”

That’s the sales pitch for Skyn, whose “ultra-soft and thin non-latex polyisoprene condom material” lets you “feel everything,” if, that is, you’re even the least bit interested. Even if sex sells, Skyn can’t create all the demand.

The 45-second video shows what appears to be a slightly futuristic night club in which men slide into crimson banquettes for  meaningful encounters with their cell phones. In another part of  the club, men and women sit by themselves peering through VR goggles, until a man’s hand accidentally touches a woman’s. Groping commences. Soon, so does cowboy style. Then a Skyn condom wrapper, with its Skynfeel technology, appears. Fade to sex.

Last summer, Macquarie Research said condom sales are falling because “young people (17-25 years old) are having less sex because they are distracted by their mobile phones.” Caroline Levy, a Macquarie analyst, estimated that Trojan brand sales were down over 3%.

To turn Trojan’s sad emoji face into a smile, it started a digital campaign to get more people in the mood.

But it’s not just mobile phones causing the downturn. Levy pointed out that, even in the aftermath of the recession, more Millennials are still living at home with parents. The basement rec room can be a romance buzz killer. Other factors may play a part including the #MeToo movement, which may have left the sexes a little unsure about legitimate signals, and, some say, the easy availability of online sex videos.

The General Social Survey from the University of Chicago notes that earlier in the 21st century, 73% of young adults said they had sex at least twice a month. Now, that’s down to 66%, and 18% have had no sex at all. Sex by high school-aged students is also down, the Centers for Disease Control and Prevention has reported.

What about that well-known hook-up line, inviting a partner to come over to “watch Netflix and chill?” Apparently, these days, those couples are just watching Netflix. “When Netflix launched, for example, sexual relations dropped 10%,” explained Mehdi Benali, managing director at Sid Lee Paris, in Skyn’s press release. “Today, it’s easier to look at strangers’ everyday lives on Instagram than it is to meet someone in person.”