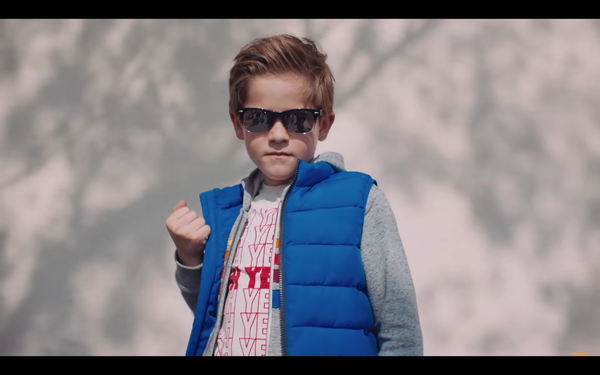 Like plenty of 1980s icons, Gymboree has seen some hard times. But it’s pinning its hopes for a comeback on a major rebranding effort, starting with a video campaign based on another ’80s legend, with a cast of back-to-school lip syncers belting out Rick Astley’s “Never Gonna Give You Up.”

The children’s clothing retailer, which filed for bankruptcy just over a year ago, hopes the playful ads will tempt parents to try its newly redesigned kids clothing line. And it has also created a new app, which leverages augmented reality to let kids flex their creative side.

The rebranding comes after months of research, says Jeff Reichelderfer, Gymboree's senior director of digital marketing. “We surveyed thousands of parents, and even visited them at home, to find out what they were looking for in brands, and in clothing. What did kids like? What didn’t work?”

The result, he tells Marketing Daily, “is that we completely re-engineered our clothing to meet their needs, where every piece is designed to work together. We made changes to quality and comfort, with basics that go from season to season, but still let kids use their modern, mix-and-match style.”

To increase relevance, it added a digital element, using a new app called Made You Smile. The app works with Gymboree’s graphic t-shirts, bringing them to life. Once parents unlock the designs, kids can play with brushes and colors. It also includes a Smile Generator, which responds to a child’s expression, and allows them to create animated emojis, and decorate photos with everything from mohawks to bowties. “We wanted to make a safe place for kids to explore,” he says.

Reichelderfer, who says the app is powered by HelloWorld and Space150, says it also includes elements for interactive “Sur-Prize” sweepstakes, with parents getting alerts on the app when they are in stores, providing chances to win discounts, scooters, a new car, or a trip to the Color Factory New York City. He hopes as many as 100,000 customers will download the app.

It’s also making significant changes to some store environments, with a modern redesign that includes a “community table” designed to keep kids entertained.

The ad campaign, created by Where Eagles Dare, includes social media, paid ads on Instagram and YouTube, and cinema ads, as well as connected TV. In malls, it’s using digital signage, and playing its video in food courts.