Audi Uses Intrigue to Sell A7, A6 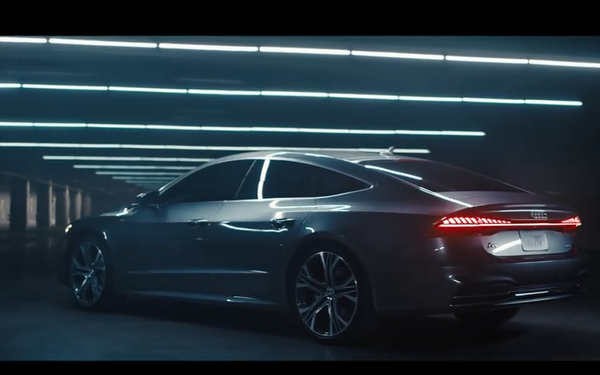 Audi of America is launching a two-part series of TV spots that focus on two different vehicles from its lineup.

The first of the series, “Night Watchman: Part 1” featuring the Audi A7 debuts tonight during the NFL kickoff on NBC and continues throughout the month across prime time, sports and late night.

“Night Watchman: Part 2” will air Oct. 1 and features the 2019 Audi A6. Creative is from Audi AOR Venables Bell & Partners.

Both campaigns feature digital support across progressive tech, lifestyle and news sites as well as social.

Audi is meticulous when it comes to engineering and design, as indicated by the tagline “Progress is never satisfied,” says Ken Bracht, director of brand marketing, Audi of America.

“Night Watchman” focuses on a security guard who patrols the halls of a testing facility in the middle of the night and comes across multiple engineers and designers perfecting their craft in a dramatically reimagined Audi test facility.

The camera pans past cold and heat chambers, an exposed chassis emerging from a zinc bath, and high-tech laser sensors as the watchman leads the viewer to the culmination of these endeavors: the Audi A7.

In Part 2, the watchman narrates a journey that reveals the high-performance capabilities behind the all-new A6, and the drama of seeing it roar down a secretive test track.