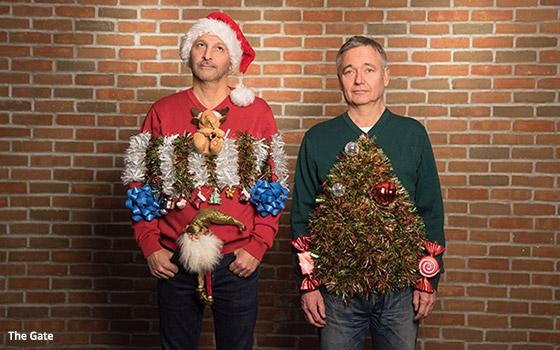 In the final week before Christmas, more agencies are issuing season’s greetings in eclectic forms.

Dailey is celebrating the agency's 50th anniversary in Los Angeles by printing 50 bits of trivia directly on 50 individual cookies, which are being dispensed as gifts. Cookie number seven, for instance, reads, “number of years we worked with Jeff Bridges after landing him his first VO job.”

GSD&M’s holiday card is going to the dogs (and cats). The Omnicom creative agency decided to focus its efforts on an advocacy drive for its neighborhood no-kill animal shelter Austin Pets Alive! The GSD&M website homepage has been made over as a hub where visitors can donate to the shelter and view some of the pets (dressed in holiday season finery) available for adoption. Clients and others are receiving printed holiday cards that feature over a dozen adoptable shelter dogs and cats.

Barú's Tree of Life holiday card is recognizing multicultural differences. Clients will receive four multicultural holiday ornaments, including a Day of the Dead skull from Mexico, a stuffed elephant from Laos, an Ashanti fertility doll from Rwanda and a Peruvian alpaca.

Empower is embracing its feminine roots with a three-part podcast series that introduces Mrs. Jessica Jingle-Claus' back story, including her romance with Santa and her marketing background. “Confessions of Mrs. Claus” is available for download on iTunes or Google Play.

Highfield is honoring its New York roots with an online store it has dubbed "Canal Street Mystery Box" that serves as a fundraiser for the New York-based charity Womankind. The agency has filled boxes priced at $25, $50, and $100 with a random assortment of items found on NYC's Canal Street, which is well-known for its eclectic array of knock-off goods and tacky products. (Think curiously inexpensive watches, expletive-laden T-shirts, and overpriced squishy toys.) Without knowing the contents, Highfield is sending these mystery boxes to purchasers with a warning: “like all good Canal Street purchases, there are no returns.”

The Gate I New York's ugly sweater contest first sent recipients an open invitation to design the ugliest creation with “bad taste” as your guide. The project received more than 75 submissions, with the agency producing the winning ugly sweater with The Gate’s president Beau Fraser and Chief Creative Officer David Bernstein wearing them at the holiday party.

Pittsburgh-based agency Where Eagles Dare spent its holidays crafting a multifaceted experience/prank that plays off opportunities to fly to space.

Quirk Creative is sidestepping the traditional holiday gift exchange in favor of a New Year’s present. This year, clients are receiving desk succulents with a personalized, punny name, such as “Succulbury Finn,” and “David Ogilvine.”

More than 3,000 recipients are receiving WHITE64's email that includes a link to the short Paper Thin video that follows an adventurous Gingerbread Man and a cold-hearted Snowman. “Remember, most of our differences are only paper thin, and easily ripped away," states the clip.

This year, in addition to a holiday gift for their clients, Summerjax created toiletry bags for a group of teens who are currently incarcerated at the Orange County Juvenile Hall. The bags, purchased from Summerjax client Hollister, are filled with self-care products often in demand, such as soap, shampoo and conditioner. Summerjax will be wrapping the presents and delivering them in-person to the juvenile detention facility on Wednesday, December 19.

While other agencies are spending energy formulating holiday cards and gifts, Barbarian is encouraging donations to nonprofit organizations by making fun of Russian president Vladimir Putin. The Shirts For Putin interactive site opens with the message, "waiting for Putin to wax his chest" before showing the shirtless leader alongside an array of potential messages, like World Peace. Users are asked to donate money to The Committee to Protect Journalists, The Human Rights Campaign, and Robert F. Kennedy Human Rights Organization.