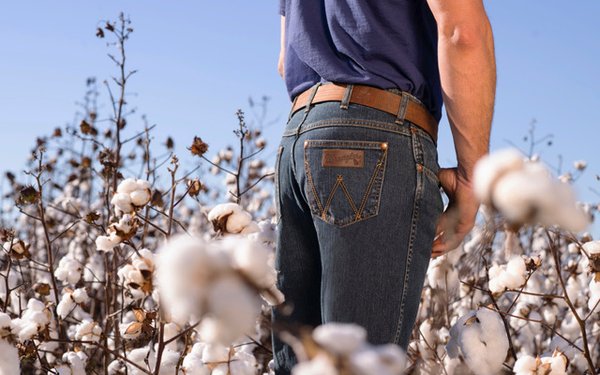 Called the Wrangler Rooted collection, the jeans come in five styles, one each for Texas, Alabama, Georgia, North Carolina and Tennessee. Each pair is made from sustainably grown cotton, traceable to a family farm, and trimmed in custom shanks, rivets, patches, pocket prints and a different wash for each state. The collection also includes two T-shirt designs for each state, as well as three national designs.

And while Wrangler is best known for its low-end hardworking dungarees, often for $20 or less, the new upscale collection cost $100, and is meant to highlight land stewardship. The five featured farms are among the first growers in the company’s Wrangler Science and Conservation program, and emblematic of the complex road farmers have to travel to make cotton sustainable.

For now, while the shirts are unisex, the jeans are only available in men’s sizes. “With our heritage and authenticity in men's denim dating back to 1947, we thought that was where the audience was,” says Roian Atwood, director of sustainability, in an email to Marketing Daily. “We’ve since heard from many women that they’re interested in a similar product. So it is something we’ve been discussing internally.”

Marketing is limited to the web, with content focusing on all five growers. And while the jeans are available on the company’s website, it says it is also making them available to some retail partners.

Wrangler says the launch is part of its commitment to sustainability, and its goal of sourcing 100% of the cotton it uses from farms using land stewardship practices by 2025.

Wrangler is owned by VF Corp., which is in the process of spinning it and other denim brands, including Lee, into a separate company called Kontoor Brands.

The launch comes amid a renaissance in denim, at least among women, after years of losing out to athleisure trends and comfy yoga pants. A new report from NPD Group, a market researcher based in Port Washington, N.Y., says that women in the U.S. bought 364 million pairs of jeans in the 12 months ended in February, a jump of 22 million pairs.

While that’s good news overall for clothing companies, the bad news is that more than half of those jeans were also on sale.

Specialty stores, such as American Eagle, H&M, and TopShop, accounted for more than a third of women’s jeans annual sales, with sales up 6%. Online sales gained 32%.