New For Fall: Looking For Love, From 'Molly' To 'Abishola' 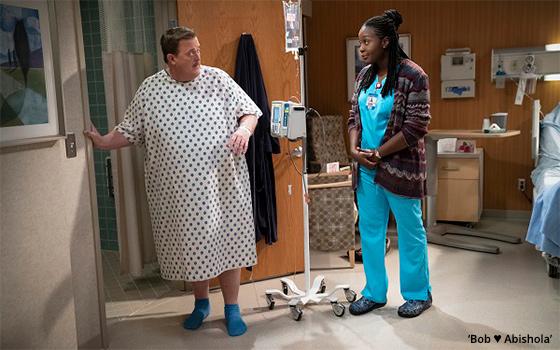 Billy Gardell previously courted (and won) Melissa McCarthy on “Mike & Molly” on CBS. This season, the question is: Can he find the same romantic success with a Nigerian-born nurse?

Welcome to the new fall season, in which questions such as the one posed above are known to spark curiosity and quicken the pulse. Or not. It all depends on one’s level of interest in the love lives of the characters played by Billy Gardell.

The fact is, he is the best part of “Bob ♥Abishola,” a new sitcom on CBS whose premiere date and time period -- next Monday (September 23) at 8:30 p.m. Eastern -- mark it as the first of all of the networks' new fall shows to make its debut.

In case you have not guessed it already, Gardell (pictured above left) plays Bob. He is a successful businessman who runs a family-owned sock company based in Detroit (compression socks, to be exact). As the show opens, portly Bob is being rushed into a hospital emergency room in the midst of a heart attack -- not exactly an auspicious start for a show purporting to be a comedy.

Surprise, surprise -- he survives. And in the process, he develops a crush on the nurse who cares for him, Abishola. The actress who plays her, Folake Olowofoyeku (above right), is so new that she has no Wikipedia entry. CBS's biographical material reveals that she is indeed an immigrant from Nigeria who took up acting while attending college in New York.

She has appeared in a modest number of TV shows and movies, according to this CBS bio. But none of them appear to be comedic. In the series premiere of “Bob ♥ Abishola,” she is wholly uncomedic as well, leading one to wonder why she was cast in this high-profile network comedy in the first place.

However, since CBS provided only the premiere episode for preview, it is possible she might show more comedy chops (and hopefully, more animation and energy) in subsequent episodes. In this episode, she appears listless, or at the very least, not quite sure what she is supposed to do.

This show is from Chuck Lorre and his production team, whose track record in the production of successful, sustainable sitcoms on CBS (including the aforementioned “Mike & Molly”) is undeniable. Perhaps they eventually figured out a way to work with her.

Gardell, however, has tons of charisma (no pun intended). The TV Blog has admired his work on TV ever since his first sitcom, the short-lived “Lucky” on FX in 2003.

But as far as this show's first episode is concerned, clearly it has not yet found its legs or its voice. It seems as if it wants to be a participant in the national conversation about race relations, albeit in a lighthearted way. But it wants to take this position within the very obvious confines of the CBS environment.

Thus, you get a show with canned laughter following every line and gesture (whether they are funny or not), and various eccentric supporting characters such as the members of Bob’s family.

This season, CBS is pairing “Bob ♥Abishola” with the second season of its race-themed, “there goes the neighborhood” comedy “The Neighborhood,” airing before “Bob ♥ Abishola” on Monday nights at 8. It is as if CBS, the most middle-of-the-road of our national TV networks, intends to school the rest of us about race relations.

On the other hand, there is nothing particularly wrong with well-meaning discussions about race relations -- whether comedic or otherwise. The pairing of these two shows has another benefit too -- the opportunity to see Cedric the Entertainer followed by Billy Gardell for free on Monday nights.

tv
1 comment about "New For Fall: Looking For Love, From 'Molly' To 'Abishola'".
Check to receive email when comments are posted.
Next story loading