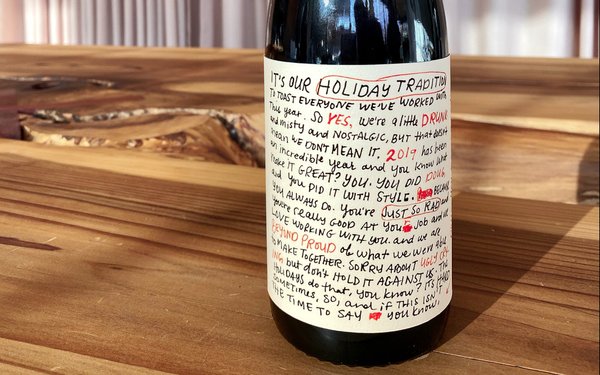 Agencies are once again unleashing their festive spirits to celebrate the holidays with projects that range from the serious to the frivolous.

NYC-based film & content studio Bindery continues its annual tradition to distribute a bespoke box of Bindery goods that form the basis for a holiday cocktail. This year's box contains all of the ingredients necessary to make a spiked hot cocoa, including Bindery-designed packaging for cocoa, as well as measuring spoons and marshmallows. The gifts even feature Bindery-labeled packing tape.

Clients of Red & Co are receiving what the agency calls a "drunken holiday card," in actuality a bottle of red wine with a cheerful and entertaining message on the label.

Curiosity went to its own in-house gift experts, also known as children of agency staffers, to provide advice on client treats. The resulting answers range from pickles and games to the curiously-suggested "sand."

LoSasso Integrated Marketing is featuring some of the furrier members of the team in its holiday cards--employee dogs. The agency's holiday package includes a card, video and calendars all showcasing pups that roam its Chicago office halls. The agency is also selling the calendar with money earmarked for the agency's local animal shelter, Chicago Canine Rescue.

While not a card, this year Levelwing clients and friends are receiving a handcrafted cast iron skillet made in the agency's HQ hometown of Charleston, SC by Smithey Ironware Company, an emerging brand Levelwing works with.

The pans are adorned with the message: "You (our partners) bring the ingredients, we'll bring the heat."

CEO/founder Dave Mering is bringing new meaning to the concept of working from home for his namesake agency's holiday gift. This year, clients are receiving olive oil derived from Mission and Manzanillo trees located on Mering's property in Napa Valley. Apparently he has quite the spread as his estate doesn't just house an olive farm, but also a vineyard, enabling him to bottle his own wine.

Kastner LA is introducing a dark and moody, yet inspiring video to encourage viewers to "Rise Up" in 2020. The clip features an array of images of those at work, mostly at their desks before ending with the message to "rise above everything that held you down in 2019."

Several agencies are using the season to support advocacy groups.  Klick Health is pledging to double its donation to the Fred Rogers Center if its kindness-inspired Contagious holiday video hits 10 million views by New Year’s. The video currently sits around six million views.

Small Army is using under-represented holiday figure Mrs. Claus to show how women in all industries experience bias and discrimination in the workplace due to their gender through a series of videos that parody 90’s children’s toy commercials.

S4 Capital's Firewood is donating over $57,000 to support five nonprofit organizations nominated by its employees through its annual Season of Giving program. This year's charities include Larkin Street Youth Services and Alliance of Moms. Each organization will receive an initial contribution of nearly $12,000 in addition to continued support throughout the year, which may include pro bono digital marketing, volunteer work, and ad hoc support. Employees across the agency’s seven offices in four countries are invited to nominate charitable organizations that champion agency values while supporting local communities.