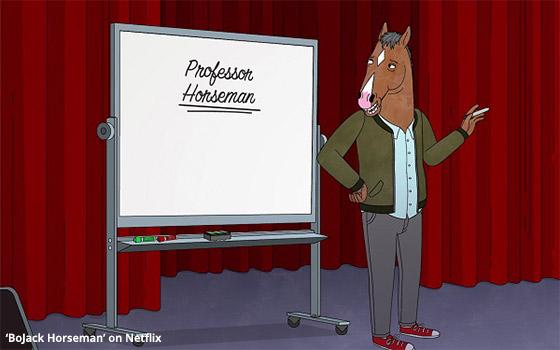 The subject of acting classes as a source for comedy has come up enough times on TV recently to qualify as a trend.

The latest example comes in the next new episode of “BoJack Horseman” on Netflix. The episode is No. 9 in this animated hit’s sixth and final season.

The season has been split into two halves, with each consisting of eight episodes. No. 9 is the first of the final eight that start running on Netflix this coming Friday (Jan. 31).

In the episode, BoJack finds himself teaching a college-level acting class in scenes that are not unlike similar acting-class scenes in HBO's “Barry” and “The Kominsky Method,” also on Netflix. So now, the number of shows mining acting classes for laughs stands at three (at least).

In all three, the teachers are actors themselves who have turned to teaching because the careers they pursued in acting did not quite turn out as they had hoped they would.

In “Barry,” the teacher is Gene Cousineau, the character for which Henry Winkler won a well-deserved Emmy.

In “Barry,” the whole idea of acting school as a means of self-discovery is parodied by the title character's story: Barry, played by Bill Hader, is a professional hitman who drifts into acting school because he fears his profession has made him emotionless.

In “The Kominsky Method,” the teacher is the title character, Sandy Kominsky, played by Michael Douglas. He was nominated for an Emmy for the role, but did not win one. He won a Golden Globe for it, however.

While aspects of Sandy's life may be chaotic in “The Kominsky Method,” he emerges on the show as a talented teacher capable of reaching, and teaching, his classes of (mostly) young amateurs.

In “BoJack Horseman,” the teacher is the title character. He is literally a “horse man” (pictured above), a being with all of the outward characteristics of a real human being, but in the show, the character has the head of a horse.

In fact, in the world of “BoJack Horseman,” human beings are seen as existing on equal footing with all sorts of animals in human guise (and fully clothed).

In the show, which has been around since 2014, the BoJack Horseman character is a former sitcom star who is no longer in demand, and also coping with various consequences that still impact his life from past behaviors stemming from his years as a headstrong TV star.

On the face of it, the premise of “BoJack Horseman” is patently absurd, but it works very well, particularly because it is animated. I mean, really -- who in their right mind would ever produce a live-action show about a talking horse? (I'm kidding -- I am well aware of “Mr. Ed.”)

The title character of “BoJack Horseman” is voiced hilariously by Will Arnett. Over the years, this show has developed enough of a cult following that it has been able to attract a slew of A-listers for various guest-voice roles -- from Rami Malek and Quentin Tarantino to Stanley Tucci and J.K. Simmons (and many others).

“BoJack Horseman” serves as a reminder that some of the best work in TV comedy these days is being done in cartoon form.

The second half of the sixth and final season of “BoJack Horseman” starts Friday (Jan. 31) on Netflix.