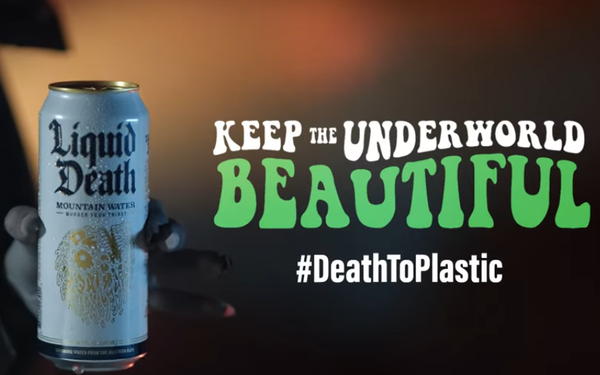 Austrian spring water Liquid Death has a simple — if weird — proposition: Kill your thirst and plastic bottles at the same time by going aluminum.

While it’s one of many brands that have aligned with environmental sustainability, it’s also probably the only one to enlist a real-life Louisiana witch doctor to put a curse on its products — and then publicize that curse.

For a taste of Liquid Death weirdness, check out this video, in which a demon of the underworld (“Some call it hell”) complains about the billions of empty plastic bottles invading a space long inhabited only by the souls of the dammed.

Liquid Death just raised $9 million in a round led by Velvet Sea Venture, augmenting the $2.25 million it had attracted from the likes of advertising notables Alex Bogusky and Gary Vaynerchuk, along with Dollar Shave Club co-founder Michael Dubin and other investors.

Next month, the brand will debut in Whole Foods stores nationwide and introduce a non-flavored, sparkling variation.

In this interview, Liquid Death co-founder and CEO Mike Cessario — whose creative background includes stints at TBWA\Chiat\Day, Doner and VaynerMedia— tells CPG FYI about the origins of the brand and its aspirations.

CPG FYI: Where did the concept come from?

Cessario: I drink a lot of water, and I come from playing in metal bands and things like that when I grew up. I didn’t drink much soda, was vegetarian for a long time and still try to eat very healthy. A lot of my friends who are in that same scene of rock and roll were very similar in terms of caring about health and what they put in their bodies.

None of the things that we were into in terms of healthy brands actually had a fun factor to them. It was only the unhealthy stuff like energy drinks and beer, soda, candy and chips that did all this funny, hilarious marketing that we liked. That was where the idea for the brand came from.

CPG FYI: Liquid Death has been sold online, in some bars and convenience stores like 7-Eleven. What’s the next step after the funding round?

Cessario: We are looking to lean into the more traditional brick-and-mortar retail space. We see a huge opportunity there, especially in the convenience store channel, and more into on-premises bars, where we’re doing really well. As you start going into more brick-and-mortar channels, it gets a lot more capital-intensive.

CPG FYI: Tell us about the bar scene.

Cessario: Liquid Death does really well in bars because [its packaging] looks like a beer. So when someone’s in a bar but doesn’t want to drink alcohol, they feel a lot more comfortable walking around a bar with a Liquid Death than a pint glass of water or a bottle of Aquafina.

The other aspect: Liquid Death is almost the perfect conversation starter. When you’re walking around in a bar with one, you’re gonna have two or three people that just start talking to you and asking about it. In a social environment like a bar, that’s something people want.

CPG FYI: Where will you be positioned in Whole Foods stores?

Cessario: In the bottled water section. That’s where we want it to live. There could be a tendency at some retailers to think “maybe we should put this in the energy drink section,” and we’re like, “no, we don’t want that because we don’t want people picking it up thinking it’s an energy drink.”

There’s nothing in the water section that remotely resembles our brand. It really does stick out like a sore thumb.

CPG FYI: What has your marketing consisted of thus far, beyond some pretty strange videos?

Cessario: We don’t do any TV. Everything we’ve done has basically been digital and social. We’ve always been serious about making sure it’s actually going to be shared by people, because we need that organic sharing.

We can’t afford to pay for millions and millions of eyeballs like the big companies can, so we only make really interesting, entertaining stuff that people feel they have to share with their friends.

CPG FYI: How would you describe the brand’s target audience?

Cessario: Generally speaking, it’s probably about 75% to 80% male, but I think we’re starting to see that our audience is expanding. We see parents posting photos of kids at soccer practice with Liquid Death, or pregnant moms drinking it with sunglasses on thinking it’s funny, or drinking it in the gym.

I think we’re starting to see that there’s a much wider audience that appreciates the authenticity and fun of the brand in a category that traditionally has just been very, very boring.