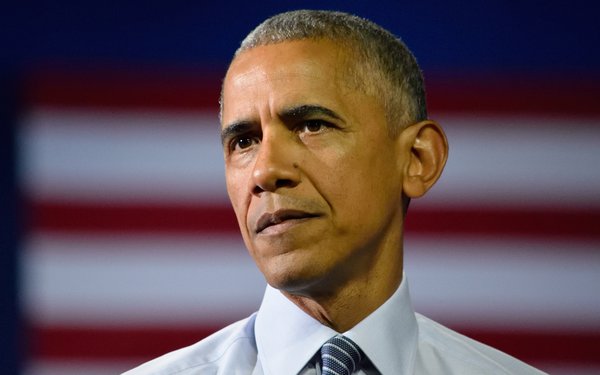 Former President Barack Obama has sent a cease-and-desist letter to South Carolina TV stations demanding that they stop running a Trump PAC ad that misuses Obama’s words to make it appear that he criticized his former vice president, Joe Biden.

The ad, created by the super PAC The Committee to Defend the President, is part of the PAC’s broad campaign to undermine Biden’s efforts to secure the Democratic presidential nomination and go up against Trump.

Biden is currently ahead in polls leading up to South Carolina’s  Democratic primary on Feb. 29. The state has a black majority electorate, and polls have long shown strong black support for Biden.

The PAC made a more than $250,000 media buy for its anti-Biden campaign in the state.

The ad starts with a narrator stating: “Joe Biden promised to help our community. It was a lie. Here’s President Obama.” It then plays audio of Obama reading a passage from his 1995 book “Dreams from My Father,” which actually had no relation to Biden, to falsely imply that Biden somehow supported “plantation politics.”

“This despicable ad is straight out of the Republican disinformation playbook, and it’s clearly designed to suppress turnout among minority voters in South Carolina by taking President Obama’s voice out of context and twisting his words to mislead viewers,” Obama communications director Katie Hill said in a statement. “In the interest of truth in advertising, we are calling on TV stations to take this ad down and stop playing into the hands of bad actors who seek to sow division and confusion among the electorate.” Law firm Perkins Cole is sending stations the letter demanding that they pull the ad.

Obama has said that he will not endorse any Democratic contender during the nomination process, but Hill stressed that the former President has “several friends” among the candidates, “including, of course, his own esteemed Vice President.”

“Donald Trump and his allies are absolutely terrified that Joe Biden will defeat him in November,” Andrew Bates, a spokesman for the Biden campaign, told The Washington Post. “Trump even got himself impeached by trying to force another country to lie about the vice president. This latest intervention in the Democratic primary is one of the most desperate yet, a despicable torrent of misinformation by the president’s lackeys.”

The PAC also spent about $250,000 on an anti-Biden campaign leading up to the Democratic caucuses in Nevada on February 22.

Its South Carolina ad repurposes a similar attack campaign that it ran last year “in several states with many black politicians, including Georgia, Michigan and Louisiana, according to PolitiFact,” notes the Post. “Similar tactics, aimed at decreasing black turnout for Democrats, were used in a radio ad by another pro-Trump super PAC, Great America Alliance, in the 2017 special House election in Georgia.”

Separately, Republicans in South Carolina have launched “Operation Chaos,” a campaign to persuade conservatives to go to the polls and vote for Biden rival Bernie Sanders in the open primary.

The National Republican Congressional Campaign Committee has said it believes Republicans can win back the House if Sanders is the Democrats’ presidential candidate.

“We think we can beat all of them, but Bernie is easier to beat because he’s so far left that it’s the type of choice we want,” an unnamed Trump campaign adviser told Politico.

The chairman of the Trump PAC, Ted Harvey, issued a statement saying the committee has “a long history of taking on Joe Biden, beyond Nevada and South Carolina,” and that the committee believes that the point that President Obama made in the passage in his book “applies perfectly to Biden.”

Our new ad playing in South Carolina: @JoeBiden joined segregationists, wrote a bill that disproportionately jailed African Americans, & blamed black parents for inequality. He will not represent us. pic.twitter.com/9qkiOOYn0V