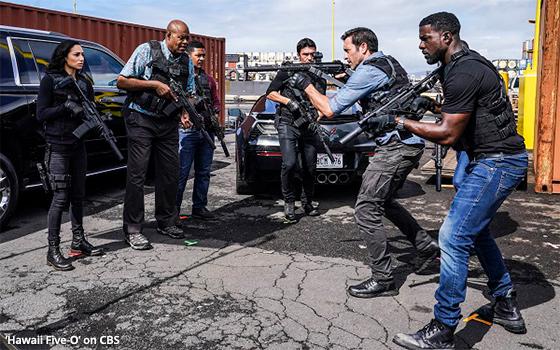 It should surprise no one -- nor spoil it for them either -- to find out that “Hawaii Five-0” goes out with its guns a-blazin’ Friday night on CBS.

Weapons were often ablaze on this gun-totin’, rootin’-tootin’ cop show that frequently made the tourist paradise of Hawaii look like a Third World war zone.

For long-time fans of the show who are accustomed to seeing pitched battles with heavy automatic weaponry in every episode, Friday night's series finale will probably not disappoint.

Others not so enthralled by this show who happen to stumble upon this episode will likely marvel at the series of miracles that prevent any of the good guys from being clipped with all those bullets flying around, while the bad guys are not so fortunate.

And here again, if that last sentence feels like a spoiler, it really is not. Sometimes, TV shows of this ilk are as predictable as the sunrise every morning.

In the episode, the villain is Wo Fat's widow, Non-Fat. Sorry. That's a joke. I don't really know her name. But she is thin.

Mrs. Fat is also diabolical and, not surprisingly, holds a grudge against Steve McGarrett (Alex O’Laughlin) because he was responsible for the death of her husband, Wo. In other words, Wo be gone, and now woe is she. Sorry -- again.

The problem is, I just never really formed a warm affection for this show over the years, even if I had 10 seasons in which to do so.

Let the record show, however, that the TV Blog always respects TV shows that can stick around that long and, in the process, make millions of dollars for everyone involved.

I have never had the good fortune to be involved in such a project, but unlike the widow of Wo Fat, I hold no grudges against anyone who has.

For those who have grown affectionate for “Hawaii Five-0” over the years, the one-hour finale has all the gunplay, macho posturing and bro hugs that anyone could wish for.

And for those who are really, really fond of this show, there may even be a few tears shed as the characters line up in one place (at some point during the show; I'm not saying when) for a rip-roarin’, macho-posturin’, good-bye bro-hug-apalooza.

To give this show and its series finale their due, CBS is sending “Hawaii Five-0” off in the most appropriate way the network knows how, by lavishly laying on the gunplay and the sentiment in more or less equal measures.

And they manage to do all that in just 43 minutes.