How Chick-fil-A Became A Teen Heartthrob

Even amid the COVID-19 crisis, Chick-fil-A isn’t releasing its hold on America’s teenagers. In fact, in the new Piper Sandler “Taking Stock With Teens” ranking, Chick-fil-A achieved the highest mindshare for a restaurant brand since the biannual survey launched back in the early aughts.

“Chick-fil-A hit numbers that we’ve never seen before,” says Nicole Miller Regan, senior research analyst with the Minneapolis-based investment firm. Chick-fil-A ousted long-time No. 1 Starbucks several surveys ago, but in this go-around, its mindshare rose to 22% among upper-income teens.

The survey tracks some 5,300 teens in 41 states, including at least a few weeks when many respondents were home from school and socially distant.

Regan says Chick-fil-A owes its success, in part, to smarter beverage offerings. “In some ways, they took a page out of Starbucks’ playbook. Teens were looking for a place to dine in, and Chick-fil-A pushed all kinds of beverages: caffeine, non-caffeine, dairy, non-dairy and frozen. And those are the major drivers in the coffee category right now.”

But beyond that, she thinks it’s the chain’s consistent attention to the details all patrons love, not just kids. “It’s the strength of being nice to people, having a clean store when you come in. That goes a long way. It’s a company that takes care of blocking and tackling six days a week.”

Starbucks ranks second, but it’s losing favor. While it once ruled teens’ restaurant world with mindshare of about 18% back in 2013, it’s now fallen to 12%. And Chipotle, showing signs of recovery after recent struggles, comes in third.

The survey also found that food continues to matter most to teens, taking up the largest share of their wallet at about 25%. (It means a little bit more to boys than girls, but not by much.) But like most experts, Regan is still wondering how the entire restaurant universe -- QSR, fast-casual, and entertainment-themed concepts, like Dave & Buster’s -- will bounce back.

“This is the first time I’ve ever modeled second-quarter revenue at zero,” she says. Nor would she go so far as to say it’s a good time to be in the QSR business. At best, she says, “drive-through is really only flattish for most companies. And delivery functionality is up, and that’s allowing them to have the least severe negative same-store sales.”

Even before the pandemic, teens had been shopping online a little more and going to the mall a little less. So while the current physical paralysis comes from mandated social distancing and shutdowns, “then it becomes a behavior," says Regan. "The big question is whether people feel like they want to be back in crowds or not.” 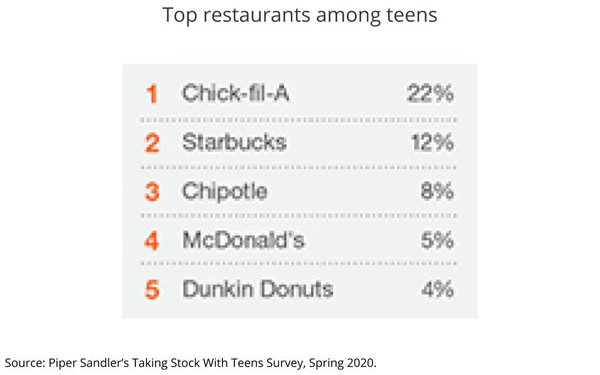