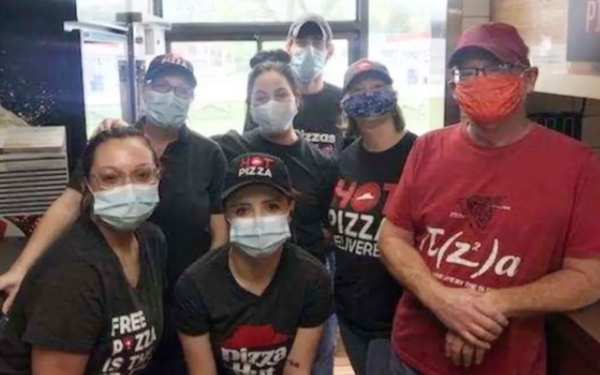 At a time when many consumer-facing brands are thanking people on the frontlines of their communities, Pizza Hut is applauding its 115,000 workers for their dedication and hard work with a campaign titled “Proud to Serve.”

The acknowledgement comes in the form of a national television spot that will break on Wednesday featuring Ben Smith, a restaurant manager in Washington state and 30-year Pizza Hut “family member.”

In a letter written to his team on March 31, Smith introduced the “Proud To Serve” theme by noting that he’s always known people who have served in the military and in the medical profession, as well as first responders.

“I was the pizza guy,” Smith wrote. “I have never gone to work wondering if I was going to come back at night. Now the world has changed. Hold your heads a little higher, because in these difficult times, especially now, we do more than bring pizza to the door.”

In the 30-second television spot from GSD&M titled “Proud To Serve,” Smith says, “We help make people feel connected. Yes, we are the pizza guys, and we’re proud to serve.”

Adds Felix, “We were blown away and inspired by his words. In lieu of shooting new footage for the ad, we used images that had been provided by franchisees doing community outreach in their local markets over the last few weeks—as well as social images of families continuing to enjoy their family pizza nights.”

According to Felix, approximately 60% of Pizza Hut’s online delivery orders are now made via contactless delivery.

Pizza Hut will debut the TV spot to its workers tomorrow in a first-ever Hut Huddles Across America—a nationally coordinated version of the company’s daily pre-shift meetings called Hut Huddles.

The ad is scheduled to run during network prime-time programming on Wednesday night. As part of Pizza Hut’s NFL sponsorship, it will also be featured during all three nights of the NFL Draft on ABC, ESPN and NFL Network beginning on April 23.