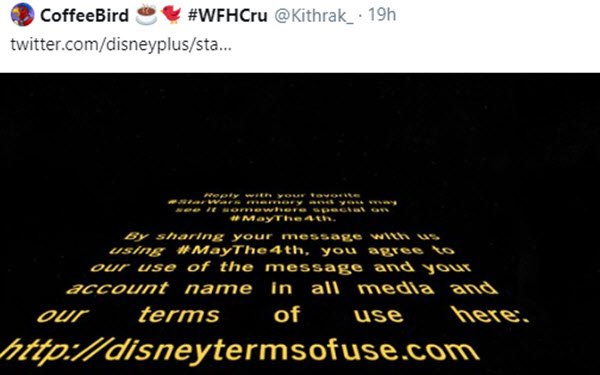 Disney created a Twitter storm on Monday in the course of promoting the early debut, on Disney+, of the final “Star Wars” movie.

Disney tweeted that it will start streaming all nine SW films, including the last chapter, “Star Wars: The Rise of Skywalker,” on Disney+ starting on May the 4th — the date that fans have designated for an annual celebration of the iconic movie series, due to the pun implied (“May the fourth be with you”).

The event is great news for fans, since it means that “Rise of Skywalker” is being released two months earlier than originally planned.

Disney sent tweets to its Disney and Disney+ social channels, including a video with scenes from all nine films, and a message telling fans who share their favorite “Star Wars” memories using the hashtag #Maythe4th that they might see their posts “somewhere special” on that date.

But in a follow-up tweet, Disney stated: “By sharing your message with us using #MayThe4th, you agree to our use of the message and your account name in all media and our terms of use here: http://disneytermsofuse.com.”

Many “Star Wars” fans took that to mean that any use of the #MayThe4th hashtag would constitute legal acceptance of Disney’s terms of use and therefore consent for Disney’s use of their messages and account names “in all media."

Cue a slew of outraged tweets and images (see above), as fans not only accused Disney of trying to infringe their rights re the popular hashtag, but raised everything from the company’s furloughs of employees during the pandemic to past refusals to grant permission for use of its characters. “I was born on May 4th — does that mean you technically own my birthday?,” tweeted one.

After five hours, Disney tweeted again, with a clarification: “The above legal language applies ONLY to replies to this tweet using #MayThe4th and mentioning @DisneyPlus. These replies may appear in something special on May the 4th!”

Even that didn’t quench some fans’ ire, although others showed more tolerance for Disney’s intent.

As for Disney’s actual legal rights, “I think it is unlikely that Disney has formed a legally enforceable contract with anybody who uses the specified hashtag even if they mention 'Disney Plus' but it is possible that a court concludes that using the hashtag could be viewed as a license or implied license to use the relevant tweet,” intellectual property expert Ann Bartow told Insider.

Same could be said for the reuse rights claimed in Twitter’s terms of use — “a very broad assertion of rights over user content [that] may not be enforceable in some contexts, especially those involving third parties,” said Bartow, director of the Franklin Pierce Center for Intellectual Property at the University of New Hampshire.

Seems that if users do not understand the terms, a “meeting of the minds” that’s required to form a contract may be absent, she explained.