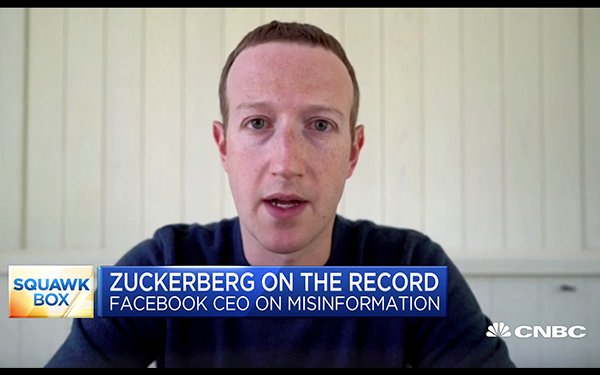 Wading into a raging battle between Twitter and President Trump, Mark Zuckerberg said this week that social networks should not be policing politicians.

“I don’t think that Facebook or Internet platforms in general should be arbiters of truth,” Facebook’s cofounder-CEO said on CNBC’s “Squawk Box” on Thursday morning.

“Political speech is one of the most sensitive parts in a democracy, and people should be able to see what politicians say,” he added.

In a first for the company, Twitter started labeling some false statements tweeted by President Trump as “potentially misleading,” this week.

The decision was made in the context of a growing backlash over Twitter’s unwillingness to police Trump’s more outrageous tweets.

In what read like a direct response to an interview that Zuckerberg gave to Fox News on Wednesday, Dorsey tweeted: “This does not make us an ‘arbiter of truth.’”

“Our intention is to connect the dots of conflicting statements and show the information in dispute so people can judge for themselves,” Dorsey explained. “More transparency from us is critical so folks can clearly see the why behind our actions.”

Separately, Trump is responding to Twitter’s policy change by threatening to “strongly regulate” the social-media business.

“Republicans feel that Social Media Platforms totally silence conservatives voices,” Trump tweeted on Wednesday. “We will strongly regulate, or close them down, before we can ever allow this to happen.”

More than mere bluster, Trump is reportedly preparing to sign an executive order on Thursday that would seek to challenge the autonomy of social giants and their content-policing privileges.

“Trump’s directive chiefly seeks to embolden federal regulators to rethink a portion of a law known as Section 230,” The Washington Post reported on Thursday, citing sources. “That law spares tech companies from being held liable for the comments, videos and other content posted by users on their platforms.”
politics, social media, twitter
Next story loading